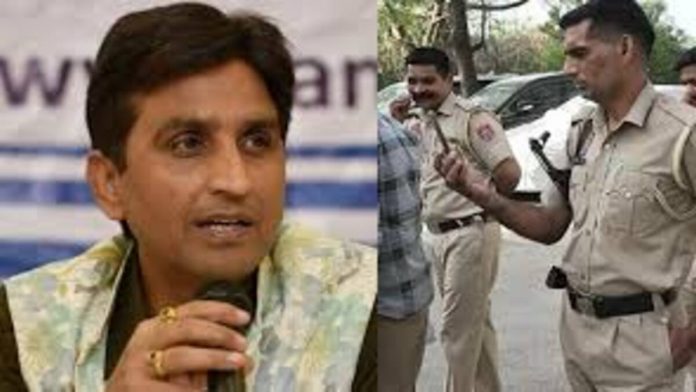 Kumar Vishwas, a former Aam Admi Party member and poet, tweeted photographs of Punjab Police officials outside his house early on Wednesday morning. After a charge was purportedly filed against him under the IT Act for allegedly doctoring a video, the Punjab Police visited to Vishwas’ house.

Vishwas threatened Punjab Chief Minister Bhagwant Mann in a tweet that AAP national convener and Delhi Chief Minister Arvind Kejriwal would “betray him.” He did not, however, mention Kejriwal in his tweet.

“I am warning you that the man in Delhi, whom you are enabling to play with the authority bestowed upon him by the people of Punjab, would one day betray you and Punjab as well.” He tweeted, “The country will remember my warning.”

Kumar Vishwas’ reportedly anti-Kejriwal remarks made before the Punjab election sparked outrage. The Bharatiya Janata Party posted a video of Kumar Vishwas, one of the Aam Aadmi Party’s founding members, stating that Delhi Chief Minister Arvind Kejriwal wants to be “either the Punjab Chief Minister or the Prime Minister of Khalistan.”

AAP politician Naresh Balyan poked fun at Vishwas shortly after his post on Wednesday, wondering why he was “scared.” “The police are just seeking documentation of what you said prior to the election. Give them the facts and put an end to the situation “He sent out a tweet.

Kumar Vishwas was heard recalling his interaction with Arvind Kejriwal in the video, according to the BJP. Vishwas, however, did not mention Kejriwal’s name in that video.

Vishwas was later provided ‘Y’ category protection by the Ministry of Home Affairs a day before the Punjab elections.