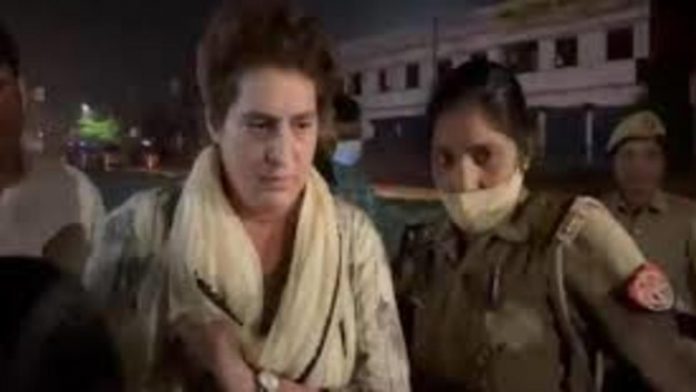 Priyanka Gandhi Vadra stated today that she had been “illegally detained” indefinitely by the Uttar Pradesh government for more than 24 hours, and she took aim at Prime Minister Narendra Modi over a Union Minister’s son suspected of running over farmers at a protest in Lakhimpur Kheri on Sunday.

“Why is it that the opposition is detained without a warrant, but a man who has perpetrated such a heinous crime is not detained? Arrest him, PM Modi, not people like us “In an interview from a government guest house in Sitapur, where she has been detained since early Monday morning, Priyanka Gandhi said.

PM Modi is scheduled to visit Lucknow soon for an event commemorating the country’s independence day, dubbed “Azaadi ka Amrit Mahotsav,” according to the Congress leader.

“Modi-ji, will you go to Lakhimpur Kheri?”

Farmers in Lakhimpur Kheri, a four-hour drive from Lucknow, were opposing Union Minister Ajay Kumar Mishra’s arrival for an event on Sunday when an SUV in his convoy slammed into a group of protesters. Eight people were killed, including four farmers.

Farmers protested with bodies in glass cases, alleging that Union Minister Mishra’s son Ashish Mishra was at the wheel of the SUV. The Uttar Pradesh police have filed a FIR against him, charging him with murder, but he has yet to be arrested.

A video, apparently of the incident, has gone viral though its authenticity is not confirmed. Priyanka Gandhi tweeted the video with a question for PM Modi: “”@narendramodi Sir, your government has kept me in custody for the last 28 hours without any order and FIR. This person who crushed the annadata (farmers) has not been arrested yet. Why?”

Priyanka Gandhi told the reporters that the first thing she would do after being released was speak with the families of the farmers who had died. On Sunday night, she was on her way to Lakhimpur Kheri when she was stopped and arrested in the early hours of Monday.

“Perhaps that’s why I haven’t been released,” she speculated, adding that she was willing to wait for “15 days, 20 days, six months, or even six years.”

Because she had not been issued with a notice or brought before a magistrate, the Congress leader said she was looking into legal possibilities.

Lashing out at the BJP for calling her a political opportunist, Priyanka Gandhi retorted: “Each person of this country- each child knows who the biggest political opportunist is. They try to undermine us and our politics, saying it is nothing serious. But I am very serious and I work seriously. I don’t sit in a jhoola (swing) with the Chinese President. I don’t visit Japan. The PM travels the world and he is the biggest tourist.”

She added: “I belong to a political party that opposes the government. It is my job to raise issues, to stand for people and to be the voice of the people. Farmers have been protesting for months on end, it is the farmer’s son who is protecting our borders. If every opposition party had not tried to visit Lakhimpur Kheri, would the state government have acted at all?”