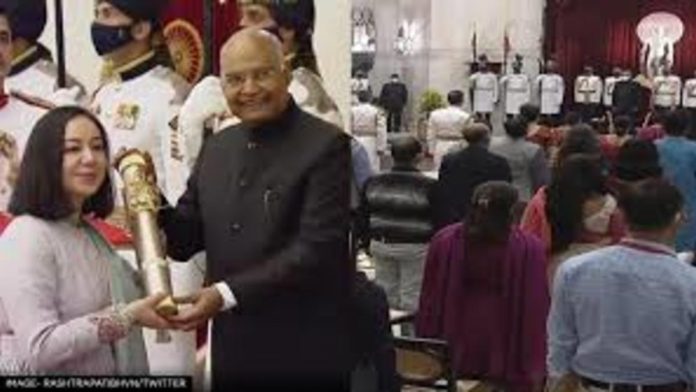 Today, March 8, 2022, on International Women’s Day, President Ram Nath Kovind will award the Nari Shakti Puraskars to 29 deserving individuals for the years 2020 and 2021. PM Modi interacted with the award recipients on the eve of Women’s Day. Twenty-eight awards will be granted to 29 women, 14 each for 2020 and 2021, in appreciation of their outstanding contributions to the empowerment of women, particularly the vulnerable and marginalised.

The Nari Shakti Puraskar is an initiative of the Ministry of Women and Child Development to recognise and celebrate women as game-changers and drivers of positive change in society. Entrepreneurship, agriculture, innovation, social work, education and literature, linguistics, arts and crafts, STEM (science, technology, engineering, and mathematics), disability rights, merchant navy, and wildlife conservation are among the disciplines that have received awards.

Meanwhile, President Ram Nath Kovind stated on Monday (March 7) that it is critical to empower daughters in order to help them become self-sufficient and achieve their goals. In a message on the occasion of International Women’s Day, which is celebrated on March 8 every year, Kovind stated that while the globe is constantly changing, Indian women are making a big influence in their personal and social lives as well as in the national arena.

“They are also contributing significantly to our country’s progress. It is critical to empower our daughters in order for them to become self-sufficient. It will allow people to pursue their goals while also meeting their responsibilities to their families, society, and country “he stated

In a statement released by the Rashtrapati Bhavan, the president was quoted as saying, “This day is also an occasion to reiterate our resolve to ensure the safety, dignity, and prosperity of women.” “We must provide opportunities for our sisters and daughters to realise their potential and thus contribute to nation-building,” Kovind said.