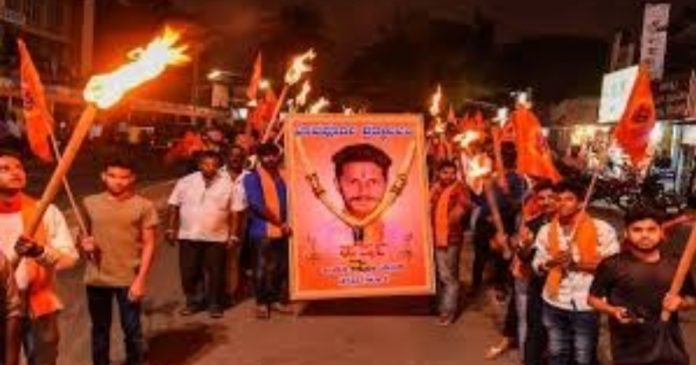 Six persons have been arrested in connection with the murder of Bajrang Dal activist Harsha in this city, while others remain at large, according to a senior police officer on Tuesday, as sporadic arson and violent events were recorded in the city this morning.

Harsha, a 28-year-old man, was stabbed to death on Sunday night in this city, prompting the imposition of a prohibitory order amid burning, rioting, and stone pelting.

“In connection with the case, we have detained Mohammed Kashif, Syed Nadeem, Ashifullah Khan, Rehan Khan, Nehal, and Abdul Afnan. Except for Kashif, who is 32, they are all between the ages of 20 and 22. They are all Shivamogga residents “B M Lakshmi Prasad, Superintendent of Police, said reporters.

He claimed that these individuals had formerly lived together but were now living separately. Kashif is facing several criminal charges.

A few more people are believed to be implicated in the case, according to Prasad, and a manhunt has been initiated to find them.

Twelve additional persons were held and questioned, according to the police officer, but their involvement was not revealed.

Following Harsha’s death, the city saw violence, arson, stone-pelting, and property damage during the funeral procession on Monday, injuring at least three people, including a photo journalist and a policewoman. Several two-wheelers were destroyed or set on fire.

Police have been stationed in every nook and cranny of the city. The district officials have urged residents to keep the quiet and tranquilly.

Despite prohibitory orders issued under section 144 of the CrPC, a few vehicles were burned in Tunganagar on Tuesday morning, according to Additional Director General of Police C Pratap Reddy.

“Following Harsha’s assassination, the city and several nearby areas were extremely tense. Additional personnel were deployed to Shivamogga, and the deputy commissioner and superintendent of police made several plans to ensure that the aftermath of the murder did not spread further “Reddy expressed his thoughts.

According to the official, 14 different acts of burning and violence occurred in the city (after the murder), necessitating the filing of FIRs.

FIRs had been filed in three cases, he said, adding that the police were attempting to locate those who had lost their motorcycles and property as a result of the fire and violence.

Earlier, a number of BJP leaders, including Karnataka Minister K S Eshwarappa and Union Minister of State Shobha Karandlaje, stated that Harsha’s murder was the result of a plot and sought an NIA investigation.

Eshwarappa, a resident of the district, claimed “Musalman goondas” were responsible for the activist’s death.

Harsha was allegedly slain by jihadi Islamists for opposing hijab in educational institutions, according to BJP National General Secretary (Organisation) B L Santosh.

The murder, according to Karnataka Revenue Minister R Ashoka, is linked to the state’s current Hijab controversy.

“When the Hijab dispute erupted, this murder occurred. There is clearly a link between this murder and the Hijab controversy “According to Ashoka.

A group of Muslim girls from Udupi had filed a complaint with the Karnataka High Court after being denied access to lessons while wearing Hijabs or Islamic headscarves.