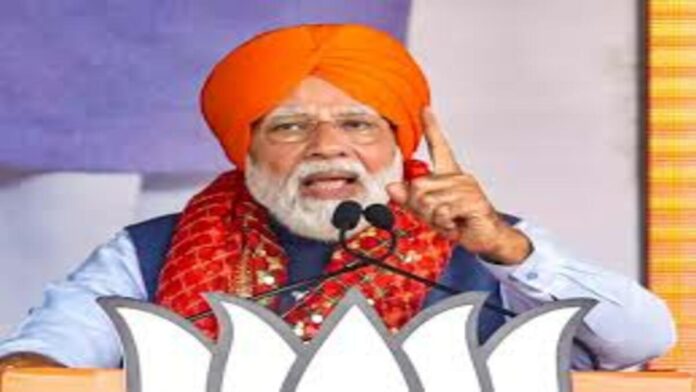 Tuesday With only a few days left until Gujarat’s first round of voting on December 1, Prime Minister Modi renewed his attack on the Congress on Monday, saying it must abandon its “divide and rule” tactics if it wants to regain the support of the state’s voters.
In an apparent dig at former Congress Prime Minister Dr. Manmohan Singh, he claimed that despite having a renowned economist as PM for ten years, the country’s economy only improved by one spot to reach the tenth spot and that in the subsequent eight years, under a government led by a “chaiwala,” it grew to be the fifth largest.

In addition, the Prime Minister charged that vote-bank politics prevented the Opposition party from using the military forces to combat terrorism when it was in power. Speaking to supporters of the Bharatiya Janata Party candidates during a rally in Palitana, Bhavnagar district, Modi claimed that Gujaratis had rejected the Congress because the state had suffered greatly as a result of the party’s strategy of stirring one group of people against another.

In response to the attack on the prime minister, Congress President Mallikarjun Kharge claimed on Monday that his party has sacrificed two prime ministers in the war against terrorism.

Kharge questioned whether any BJP leaders had participated in the struggle for the nation’s independence. “We have put in the effort to combat terrorism. We have given up our leaders in order to keep the peace in the nation. Indira Gandhi gave her life in order to preserve national unity. Rajiv Gandhi was killed as a martyr for preserving national unity. Is there a BJP politician who at least battled for the nation’s freedom? Kharge enquired.

In the meantime, AAP leader Arvind Kejriwal stated there is a great craze for the Aam Aadmi Party among women and young in Gujarat as it promises to combat inflation and unemployment and claimed the AAP will win more than 92 seats out of a total of 182 in the Gujarat Assembly elections next month. At a news conference earlier in the day, he had stated that he would give written confirmation that three AAP candidates, including Gopal Italia, the party’s nominee for governor of Gujarat, and Isudan Gandhvi, the candidate for chief minister, would triumph by a wide margin.

The first round of campaigning for the December 1 Assembly elections in Gujarat comes to a close on November 29.

The second and last phase of voting will take place on December 5, and the results will be tallied on December 8.

The Chhat ghats on the banks of the Yamuna will be restored, along with other facilities, so that they can hold their festival without interruption, the Delhi chapter of the Congress has pledged in its campaign for the upcoming local elections in Delhi.

Anil Chaudhary, the head of the Congress’ Delhi branch, claimed that Arvind Kejriwal had “betrayed” the Purvanchalis who reside in the nation’s capital by making untrue promises and preventing them from celebrating their most significant holiday.

In addition, Chaudhary declared that if the Congress wins the municipal elections, defending the “rights and protections” of Dalits and other minorities will come first. According to Chaudhary, the Congress would put in place a number of social welfare programmes to give these populations, especially Dalit children, a strong foundation through education.

The Delhi BJP feels optimistic about winning in the meantime. According to a senior party leader on Monday, an internal survey of the Delhi BJP indicated that the party may win 170 of the 250 wards in the MCD elections next month. According to Harish Khurana, the media coordinator for the Delhi BJP, the survey, which had a sample size of 43,750 people, was conducted between November 13 and November 25.

Raghav Chadha, an AAP leader, claimed on Sunday that his party will win more than 230 of the 250 seats up for election in the upcoming Delhi MCD election. The Aam Aadmi Party (AAP) will triumph in the MCD election with a sizable lead. During a party “padayatra” in Keshavpuram, he said, “People are glad that finally there is a chance to remove this corrupt BJP from the municipal corporations.

On December 4, the Municipal Corporation of Delhi (MCD) will hold elections for its 250 wards. Results are going to be announced on December 7.