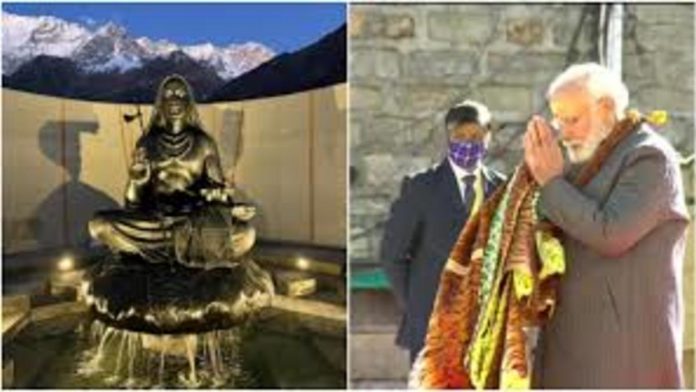 Prime Minister Narendra Modi conducted prayers and performed ‘aarti’ at the Kedarnath temple early Friday. The statue of Adi Guru Shankaracharya, an 8th-century seer who reached Moksha at Kedarnath, was then unveiled.

The unveiling of Adi Guru Shankaracharya’s 12-foot statue was streamed live around the country at the 12 jyotirlingas, four Shankaracharya mutts (monasteries), his birthplace, and other notable temples. In the 2013 deluge, Shankaracharya’s samadhi was devastated.

PM Modi will later in the day lay the foundation stone for Kedarpuri redevelopment projects costing over Rs 400 crore during his visit.

PM Modi’s visit to the Himalayan temple is not his first. He had previously visited the Kedarnath temple to offer prayers, and his visit on Friday will be his sixth as Prime Minister. PM Modi’s visit is notable because it was his effort to rebuild Kedarnath after the tragedy in 2013.

Uttarakhand Chief Minister Pushkar Singh Dhami and his Cabinet colleagues assessed temple preparations ahead of PM Modi’s visit. He claimed that all preparations had been made and that Kedarpuri was ready to greet PM Modi.

Pushkar Singh Dhami was reported by news agency PTI as stating, “The Prime Minister’s aim is to create Devbhoomi as the world’s spiritual and cultural capital, where people from all over the world come for peace.”

Pushkar Singh Dhami explained that redeveloping Kedarnath on such a vast scale is a step toward realising that vision.

“For us, this is a proud occasion. In Kedarnath, the prime minister has done things that no one has thought of doing in hundreds of years “PM Modi has complete faith in Baba Kedar, according to Pushkar Singh Dhami.