PM Modi On 3 Day Visit To Gujarat, WHO Chief To Be Present Through Out The Visit 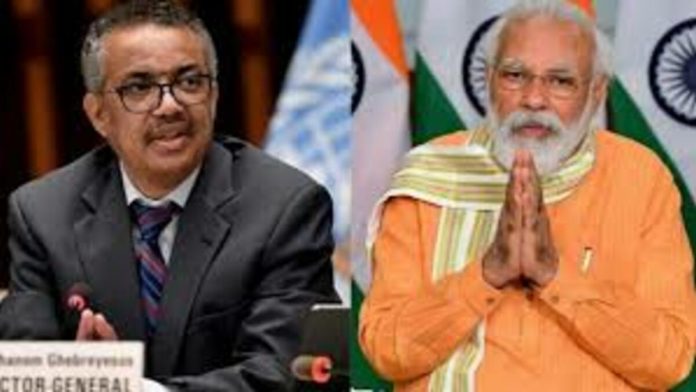 Prime Minister Narendra Modi will arrive in Gujarat today for a three-day visit, during which he will dedicate some development projects to the nation and lay the foundation stone for others. PM Modi will attend events in Gandhinagar, Banaskantha, Jamnagar, and Dahod during his tour.

“These programmes will cover a variety of industries and will increase people’s ‘Ease of Living,” he wrote in a series of tweets on Sunday.

During the three-day visit, Dr. Tedros Ghebreyesus, Director-General of the World Health Organization (WHO), will also be present. Along with Prime Minister Modi, he will take part in a few events.

Ghebreyesus will arrive in Rajkot on Monday and spend the night there before joining PM Modi in Jamnagar on Tuesday to lay the foundation stone for the World Health Organization’s Global Centre for Traditional Medicine (GCTM).

On Monday, Mauritian Prime Minister Pravind Kumar Jugnauth will arrive in Rajkot, where he will be greeted by cultural festivities at the airport and along the route of his cavalcade.

When the Prime Minister arrives in Gujarat on Monday, he will pay a visit to the Vidya Samiksha Kendra. “To boost learning results, this modern centre uses data and technology.” PM Modi stated, “I will also connect with individuals who work in the education sector.”

The event in Banaskantha, according to PM Modi, would take place on Tuesday at the Banas Dairy complex. There will also be the opening of a new dairy complex and a potato processing plant. The PM stated, “Both of these initiatives will empower local farmers and help to value addition in the agro-dairy industry.”

The foundation stone for the WHO Global Centre for Traditional Medicine will be set on Tuesday, according to the Prime Minister. “This Center will bolster efforts to promote global wellbeing through traditional forms of medicine,” he continued.

The Prime Minister will attend the Global AYUSH Investment and Innovation Summit on Wednesday at Gandhinagar’s Mahatma Mandir.

He’ll be in Dahod later in the day for the Adivasi Maha Sammelan, which will focus on uplifting the impoverished and marginalised.

PM Modi will dedicate to the country a new dairy complex and potato processing factory built at a cost of over Rs 600 crore in Banaskantha district. He’ll also dedicate the Banas Community Radio Station, which was founded to assist farmers with important scientific knowledge on agriculture and animal husbandry. The Prime Minister’s Office (PMO) estimates that the radio station will reach over 5 lakh farmers in roughly 1700 communities.
The Prime Minister will pay a visit at the Command and Control Centre for Schools in Gandhinagar. “To improve overall learning outcomes for pupils, the Centre collects over 500 crore data sets annually and analyses them meaningfully using big data analytics, artificial intelligence, and machine learning,” the PMO stated.