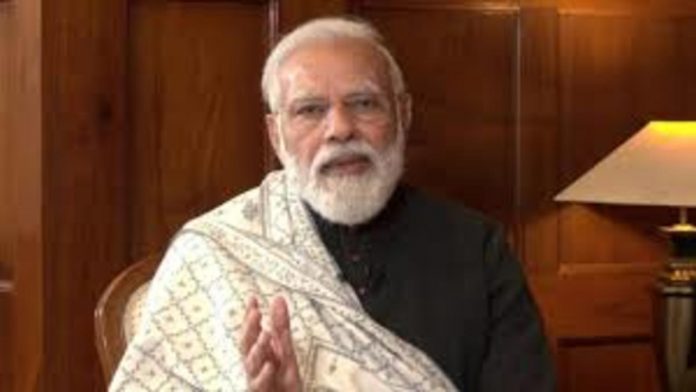 PM Modi expressed confidence in the BJP’s chances in the upcoming elections in UP, Punjab, Uttarakhand, Goa, and Manipur, stating the party will win “complete majority” in all five states. In an interview with a news outlet, he remarked, “I have witnessed a tendency towards BJP in all these states.”

Modi was asked if a favourable outcome will be interpreted as a referendum on his popularity “The Bharatiya Janata Party (BJP) believes in collective leadership. It will be a vote on our performance, intentions, and behaviour.”

Modi’s bold decision to recall three contentious agriculture reform bills was justified. “In my message, I also stated that I would be removing the three legislation in the national interest. Future events will reveal why it was necessary to do so “When asked if the retreat was a personal setback, the PM responded yes.

He did not believe that being the incumbent could affect the BJP in Uttar Pradesh, Uttarakhand, Goa, and Manipur. “Wherever the BJP has the chance to work with stability, there is a climate of ‘pro-incumbency’ rather than ‘anti-incumbency.’ With ‘pro-incumbency,’ the BJP is always victorious in elections “Modi stated the following.

He claimed that the people of Uttar Pradesh have already abandoned the ‘ek bar aao, ek bar jao’ notion (come to power once and then go). “Since 2014, the BJP has been through it. People recognised our government’s accomplishments, and we were re-elected in 2017 (assembly) and 2019 (Lok Sabha elections). They will see our work in 2022 and accept us once more “the Prime Minister stated.

The partnership between SP head Akhilesh Yadav and RLD chief Jayant Chaudhary, Modi said, could not be a barrier for the BJP, noting that the ruling party had defeated the Congress-SP coalition in 2017 and the SP-BSP alliance in 2019.

“We’ve seen the ‘two boys’ game before (2017 Uttar Pradesh elections)… They were so arrogant that they said things like ‘Gujarat ke do gadhe.’ They were taught a lesson by UP. They also had Bua (BSP supremo Mayawati) with them afterwards “he stated

On the claim that Yogi Adityanath’s approach to law and order was illegal, the Prime Minister supported him up. “He followed the method to the letter. Otherwise, there would have been a slew of PILs filed against him “he stated

In response to allegations that the Uttar Pradesh government failed to take action against Union Minister of State for Housing and Urban Development Ajay Mishra, Modi stated that the state government had properly followed the Supreme Court’s directions.

He applauded the Yogi administration’s achievements, praising what he called “improvements in law and order.” “People had problems under earlier governments because of mafia raj, gunda raj, and the way strongmen benefited from political patronage and status,” he explained.

“Women in Uttar Pradesh were unable to go because of this. Women nowadays claim that they can go out after dark. This level of confidence is necessary for security. Goons in Uttar Pradesh used to be able to do anything they pleased, but now they have to surrender. Yogi ji put security first and didn’t take chances with it “The Prime Minister stated.

Modi made a key remark on caste and community coming to the fore during elections, saying: “The emphasis is on differences and social inequality, with the number of tickets allocated to each caste being debated in detail. Other communities, on the other hand, are considered as a monolith and receive no such discussion. I’m from Gujarat, and I’ve noticed that among Muslims in the state, there are at least 70 OBC castes who receive benefits. These, on the other hand, were never discussed. It’s past time for the discussion to move on from these issues.”

When asked about the polarisation and its potential consequences for India’s image overseas at a time when the country is seeking foreign investment, the Prime Minister struck an assertive tone, noting that the country currently has a strong reputation that is mainly independent of the media. “You can see that in the inflows of FDI and FII, as well as the response to our PLI scheme,” he remarked.

The Prime Minister continued his attack on “nepotism” in politics, as exemplified by dynastic family businesses. “Such gatherings may now be found all around the country. They pose a threat to democracy by deterring young people from entering politics because they realise their future opportunities would be limited in a party where leadership is selected by hereditary succession. Even those who wish to leave the BJP are unable to do so, which is why our party continues to grow “he stated