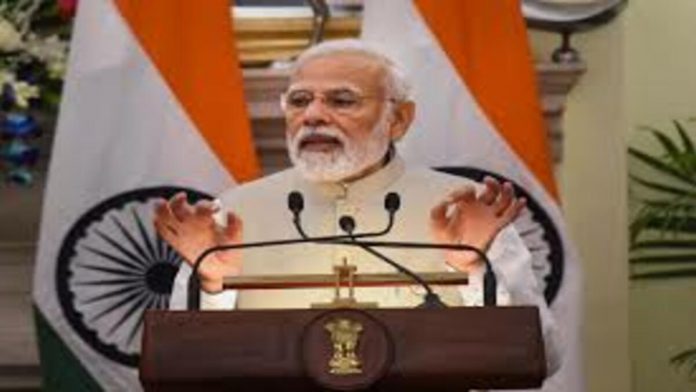 Prime Minister Narendra Modi announced many development projects worth over Rs 20,000 crores during his visit to Jammu’s Palli village on Sunday. On the occasion of National Panchayati Raj Day, Prime Minister Narendra Modi addressed the Gram Sabhas across the country, saying that it is a source of great pleasure that democracy has reached the grassroot level in the union territory.

“This year’s Panchayati Raj Day in J&K marks a significant transformation. “It gives me great pleasure to communicate with you all from here, when democracy has reached the grassroot level in J&K,” Modi remarked.

As the BJP government looks to present a new chapter for J&K post-Article 370, top business leaders from the UAE are joining the PM on his tour, underscoring the support of industrialists and investors from a leading Islamic bloc. Furthermore, the PM’s talk, which will be delivered from Samba on the Pakistani border, will coincide with National Panchayati Raj Day, and will be attended by representatives of rural local bodies from across the state as a demonstration of grassroots democracy in the state. UAE companies are anticipated to submit investments totaling more than Rs 3,000 crore, which would be a first for infrastructure development in J&K.

As he inaugurated and lay the foundation stones of a plethora of projects for the Union Territory on Sunday, Prime Minister Narendra Modi appealed out to the youth of Kashmir, telling them that they will not suffer as their parents and grandparents did in the past.