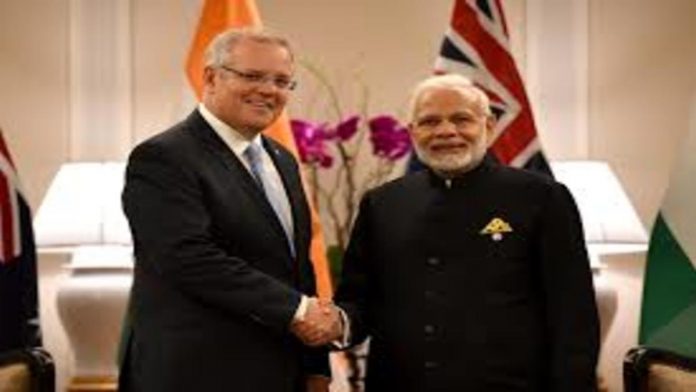 On Monday, Prime Minister Narendra Modi and his Australian counterpart Scott Morrison will hold a virtual summit in which they will announce initiatives worth approximately Rs 1,500 crore in areas such as education, clean technology, critical minerals, space, foreign trade, skills, innovation, and defence exchanges.

According to sources, an Australia-India young defence officers exchange programme named after CDS General Bipin Rawat, who died in a helicopter incident in December last year, will be started on Monday.

During the meeting, Australia will also announce the return to India of about 29 culturally valuable artefacts.

An early harvest deal on economy and trade is expected to be reached before the end of the month, according to sources. It was improbable that a signature would take place at the summit.

Rs 193 crore of the Rs 1,500 crore package of projects will go to clean tech and vital minerals, which will mostly be used to get lithium from Australia, among other things.

Australia has significant lithium reserves and can serve as a stable source of the vital mineral for electric vehicles and batteries. Pralhad Joshi, the Minister of Mines, is slated to fly to Australia soon to finalise details for securing the supply chain.

Rs 136 crore will be spent on a space cooperation effort, Rs 152 crore on a foreign trade centre in Australia, Rs 97 crore on a trade, skills, and innovation programme, and Rs 93 crore on scientific innovation.

According to insiders, the two countries will also introduce Maitri scholarships, which will be similar to the Fulbright or Rhodes scholarships.

According to the sources, a centre for excellence in crucial and emerging technologies will be established in Bengaluru, coupled with a new consulate general.

According to sources, an agreement on broadcasting will be finalised to transmit Indian programmes in local languages throughout Australia.

There will be an agreement to establish a task force to recognise each other’s educational qualifications, allowing students and skilled professionals to move more freely between the two countries.

At the summit, a collaborative letter of intent on migration and mobility partnership will be finalised.

According to a source, the summit on Monday will emphasise that Australia and India are “top-tier partners,” and that the two countries will “provide greater ambition and tangible progress for the relationship.” The activities that will be announced will highlight the two countries’ technological, talent, and trading spirit.”

“They’ll help achieve the resilience, prosperity, and security that we both seek for the area by addressing some of the most pressing issues and opportunities that both Australia and India confront.” It will show that the Prime Ministers are constructing a bilateral architecture that is appropriate for the post-pandemic environment, according to the source.

According to the source, Prime Minister Morrison will announce a number of innovative new measures aimed at boosting bilateral cooperation to more than Rs 1,500 crore. “It is the largest ever Australian government investment in the bilateral relationship between India and Australia,” the person said.

The inaugural virtual summit, which took place on June 4, 2020, saw the India-Australia partnership promoted to a “Comprehensive Strategic Partnership.” That was India’s first virtual summit, in the midst of the Covid-19 pandemic’s first wave.

“The leaders will assess progress on the Comprehensive Strategic Partnership’s numerous programmes. The virtual summit would pave the way for new initiatives and greater cooperation between India and Australia in a variety of areas, according to Ministry of External Affairs spokesperson Arindam Bagchi, who announced the summit on Thursday.

The Ukrainian conflict is likely to come up in the talks between the two Prime Ministers.

When asked about the upcoming Ukraine crisis on Sunday, Australian High Commissioner Barry O’Farrell said that at the Quad leaders’ conference in February, all countries, including India, acknowledged that “each country has a distinct perspective, due to its own bilateral connections.”