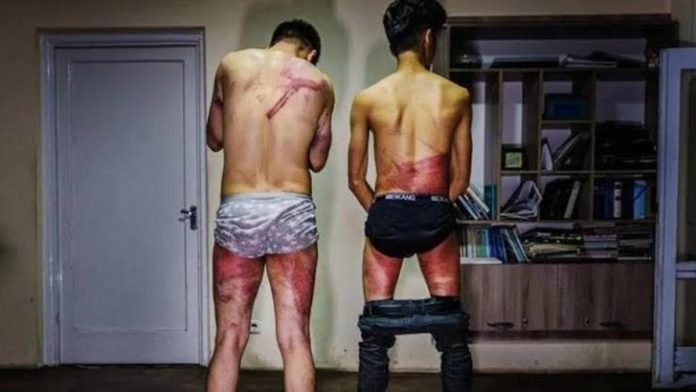 Massive groups of women rocked Kabul streets with protests on Tuesday raising slogans against Pakistan. Following this Taliban fired in the air and arrested many Afghan journalists who were reporting the protests.

Two days after the incident, pictures of two Afghan journalists who were brutally beaten by the Taliban have emerged. In the pictures the two journalists are covered with heavy injuries.

Sharing a photo of the two showing blood clots all over their body, American journalist Marcus Yam tweeted, “Painful. Afghan journalists from Nemat Naqdi & Taqi Daryabi display wounds sustained from Taliban torture & beating while in custody after they were arrested for reporting on a women’s rally in Kabul.”

Many other journalists covering the protests were arrested on Tuesday.

An Afghanistan news media reported that the Taliban has arrested it’s cameraperson Wahid Ahmadi and confiscated his camera to prevent him from filming the protests.

In the mean time, human rights group Amnesty International in it’s post on Twitter said that it is “deeply concerned about reports on use of violence against peaceful protestors and journalists in Kabul by the Taliban”.

The protests by hundreds of Afghans including women wearing hijab took to streets to protests against the Pakistan’s assistance to Taliban in carrying out airstrikes against resistance in Panjshir. They also chanted slogans like “death to Pakistan”.

It was perhaps the largest public demonstration in Kabul after the Taliban took control of the capital city.

During the protests, the people were also chanting slogans in favour of the leader of National Resistance Front (NRF), Ahmad Masoud.