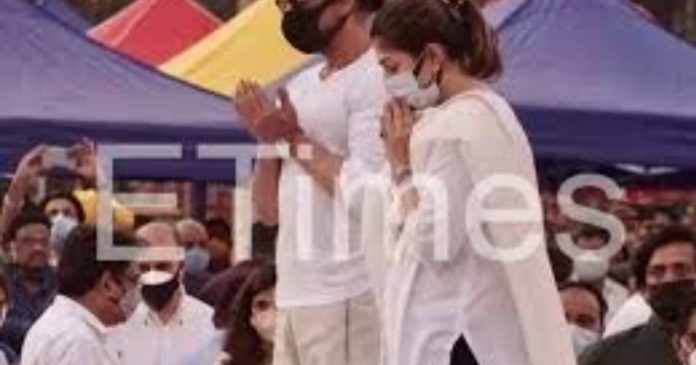 Superstar Shah Rukh Khan’s offering of prayer at legendary singer Lata Mangeshkar’s funeral has become an issue of discussion after he said his prayer and took off his mask blew as per Islamic ritual. Fans found it as the clear picture of India’s secularism but many criticized the act.

State in-charge of BJP’s Haryana unit, Arun Yadav alleged SRK sharing and video with a caption, “Kya isne thuka hai (Did he spit)?” and another leader who is Uttar Pradesh’s BJP spokesperson, Prashant Umeao also alleged the actor with the same allegation. These remarks erupted huge anger over social media. Few came out to explain the ritual of blowing in to the wind to ward off evil. “Unreal that ppl actually think one of the most prominent figures in India spat on the mortal remains of a Bharat Ratna in full media glare,” one of the netizens said in a tweet.

Actor-turned politician also supported SRK tweeting, “This is not spitting. This is called offering up a prayer and blowing into the wind. This practice, this culture represents India too. You have put up a photo of the Prime Minister, if only you could have learned something from him. Listen to this one song by India’s great daughter where she speaks of providing good sense to everyone, and how each human being is god’s child.”

Pictures and videos showing Shah Rukh Khan and his manager Pooja Dadlani offering prayers to the veteran singer have been widely shared over the internet. The reason why the visuals are widely shared is because, at one side SRK had his hands raised for dua, while his manager had her hands folded in a single frame.

The melody queen, died at 92 with multi-organ failure on Saturday. She was often titled as Nightingale of India.