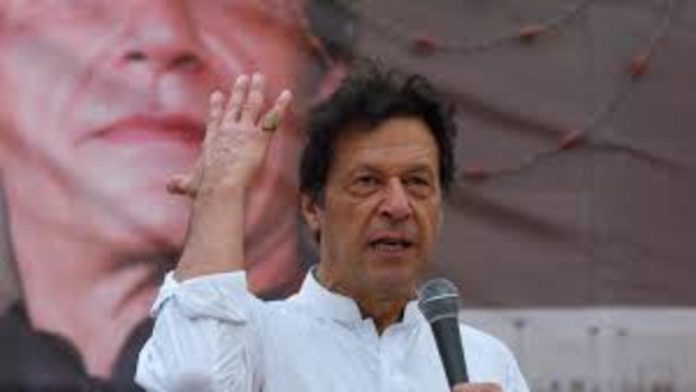 As he addressed the nation ahead of voting on a no-trust motion against him in Pakistan’s National Assembly on Sunday, Pakistan’s Prime Minister Imran Khan, beleaguered but defiant, said he will not resign but will fight it out to the end, pointing to a foreign conspiracy to destabilise his government.

“I’ve always played till the final ball, even as a cricketer.” And I intend to do so right now,” Khan stated.

Despite being reduced to a minority in parliament due to the departure of crucial partners, Pakistan’s fate will be decided on Sunday, according to Imran Khan. “I want my country to see the faces of people who sell out their conscience (in the assembly),” he said, accusing the opposition of buying members’ support. “This drama is unfolding right in front of the eyes of the entire country at Marriott and Sindh House.”

Sindh House, by the way, is where the Opposition huddled on Wednesday.

“We got signals from some foreign nations stating that they are furious but are willing to forgive Pakistan provided Imran Khan is gone,” the 69-year-old Pakistani prime minister stated, referring to the no-trust resolution as a “foreign conspiracy” against him and his government. In what looked to be a blunder, he cited the United States as the source of the threat.

According to Khan, the “formal letter” of threat was presented to Pakistan’s ambassador in a room full of diplomats taking notes, and the foreign official understood that those who would succeed him would have no problem following directions from outside powers.

“But what is most concerning is that our people, who are sitting here,” he continued, referring to the “three stooges” – PML(N) president Shehbaz Sharif, who is also the Opposition Leader, Pakistan Peoples Party co-chairman Asif Ali Zardari, and Jamiat Ulema-e-Islam chief Maulana Fazlur Rehman.

The prime minister wondered aloud, “Will foreign countries welcome such crooked people in authority in their countries?”

The US State Department said on Wednesday that it did not send any letter to Pakistan on the country’s present political circumstances, denying allegations that it was involved in the no-confidence vote.

The prime minister fought back against his critics, who blamed him for the country’s current state. The Pakistan Tehreek-e-Insaf (PTI) and its supporters have failed to stop the country’s extraordinary inflation, and several ministers have been charged with corruption.

Khan deviated into the three-decades vs. three-year storyline in his little over 40-minute speech, saying, “I have been in power for three to three-and-a-half years, whereas you (the opposition) have governed the country for over 30 years.”

The embattled prime minister fought back against critics who claim Pakistan is a US ally. “So many Pakistanis have made the ultimate sacrifice.” Is there anyone who thanked us for that? If we don’t support America, they’ll turn on us like a wounded bear, we’ve been informed. We declared after 9/11 that if there was a terror attack in the United States, we should help them, but that wasn’t our war to fight. He claimed that Musharraf “led Pakistan into America’s war on terror.”

“I merely wanted to have an independent foreign policy,” Khan stated when asked why he brought up the Kashmir issue in his speeches and at international conferences. “I have raised the Kashmir problem only after New Delhi defied international law on August 5, 2019 by abrogating Article 370,” he said, adding, “I am not anti-India, not anti-Europe, not anti-US, but independent.”

India has maintained a firm stance on Jammu and Kashmir. According to India, the issue “was, is, and will forever” be an important part of the country.

To defeat the Opposition’s attempt to depose Imran Khan and his government, he will need 172 votes in the 342-member Assembly. The opposition, on the other hand, claims the support of 175 legislators and demands that the prime minister quit immediately.

If he fails to show his majority on Sunday, Imran Khan would become Pakistan’s first no-confidence prime leader; he is the third prime minister to face the challenge. In Pakistan, no prime minister has ever served a full five-year tenure.