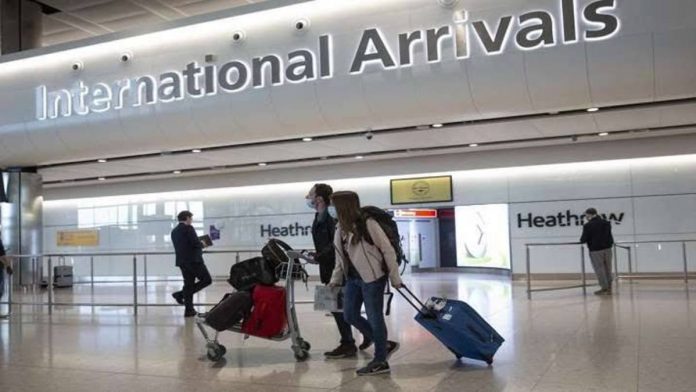 On Friday, India implemented reciprocal quarantine measures on British citizens. According to sources, the new restrictions will impose a 10-day quarantine on all British nationals, comparable to what the UK now does with fully vaccinated Indian nationals.

According to sources, the new sanctions would take effect on October 4 unless the United Kingdom changes its decision, implying that there may be room for negotiation. The announcement, however, suggests that so far, conversations made between officials and during a conference of Foreign Ministers in New York last week have not yielded any results.

On September 21, Foreign Secretary Harsh Shringla initially discussed the prospect of applying reciprocal sanctions, citing the UK’s refusal to modify the quarantine requirement till then.

Multiple Tests
According to the new regulations, all British nationals arriving in India from the UK, regardless of vaccination status, must undergo a pre-departure COVID-19 RT-PCR test 72 hours prior to travel, followed by similar tests upon arrival at the Indian airport, and then another RTPCR test on the eighth day after arrival in India.

That apart, the British travellers to India will have to be in “mandatory quarantine at home or in the destination address for 10 days after arrival in India”.

The escalating controversy over vaccination certificates and the quarantine period has cast a pall over London’s planned high-level visits to India.

According to sources, the measure will not impact Non-Resident Indians (NRIs) with permits who are already in the UK, but it will likely affect PIOs and OCI-card holders who are British nationals.

No Tourists
The new procedures have been implemented, despite the fact that there is now no tourist traffic from the United Kingdom to India because New Delhi has not resumed granting tourist visas. However, it is known that the British side, which had seen some “good progress” in the talks about lowering the UK’s quarantine requirement for Indian people, saw the Indian decision as “unexpected.”

The Indian declaration came only days after the United Kingdom recognised the Serum Institute of India’s Covishield vaccine but kept the 10-day quarantine period for fully vaccinated passengers from India, escalating the rift between the two countries. On August 8, the UK transferred India from the ‘Red List’ to the ‘Amber List,’ restoring tourist visas for Indian visitors but maintaining the 10-day quarantine requirement.

There are no issues with the Covishield vaccine, according to British sources, but there are “technical difficulties” preventing the UK from interacting with the Indian side, which is required for verifying vaccination certificates.