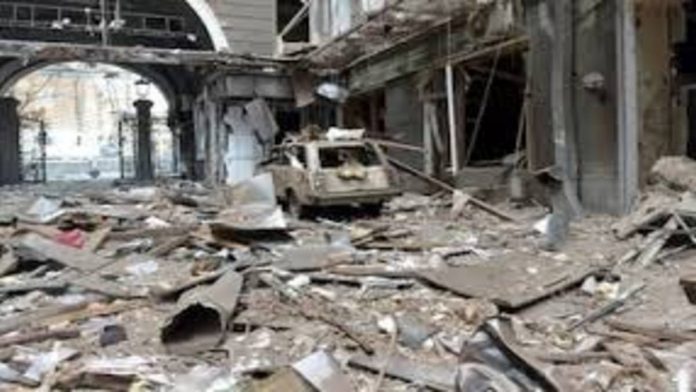 Russian aircraft bombed cities in Ukraine’s eastern and central regions overnight, including the capital Kyiv, as the invasion reached its 14th day. So far, two million civilians have fled Ukraine as a result of the Russian assault, the majority of them are women and children. President Volodymyr Zelenskyy of Ukraine called for the expansion of humanitarian corridors on Tuesday and urged his people to continue opposing Russia’s assault in a new video. Meanwhile, in response for its conflict in Ukraine, the United States has put a restriction on Russian oil imports.

Sumy, Ukraine, was evacuated with over 5,000 people. The city had been bombed, resulting in human casualties and widespread destruction.

On Wednesday, Ukraine’s Centre for Strategic Communications said that a six-year-old child died of dehydration as a result of Russian troops’ siege of Mariupol.

Protesters in Washington, D.C., have renamed the Boulevard where the Russian Embassy is located after Ukraine President Zelenskyy, according to NEXTA.

The International Atomic Energy Agency announced on March 8 that systems that monitor nuclear material at the Chernobyl radioactive waste plants, which were taken over by Russian soldiers, have stopped transmitting data.

Ukrainian did not enable humanitarian corridors for people to flee Mariupol and Volnovakha to be enforced on Tuesday, according to the Donetsk People’s Republic’s People’s Militia.

After the Russian attack in Sumy, Ukraine, approximately 5,000 people were evacuated, with civilians killed.

Following Moscow’s invasion of Ukraine, Coca-Cola Co and PepsiCo Inc said on Tuesday that they are stopping sales of their sodas in Russia, becoming the first high-profile Western consumer companies to do so. Coca-business Cola’s in Russia and Ukraine is expected to contribute 1% to 2% of the company’s net operating revenue in 2021, according to the company.

The Pentagon has turned down Poland’s offer to hand over its MiG-29 fighter jets to the US for use by Ukraine. The Polish government’s proposal to deliver the jets to the US Ramstein Air Base in Germany, according to Pentagon spokesman John Kirby, raises the troubling prospect of jets departing from a US and Nato base flying into airspace contested with Russia in the Ukraine war.

“We will continue to talk with Poland and our other Nato partners about this issue and the tremendous logistical challenges it poses,” Kirby said. “However, we do not believe Poland’s plan is tenable.”

President Joe Biden of the United States spoke with Ukraine’s President Volodymyr Zelenskyy to discuss the situation on the ground and to address the United States’ continued support for Ukraine and the Ukrainian people.

“We have provided more than $1 billion in security assistance to Ukraine,” Biden later tweeted.