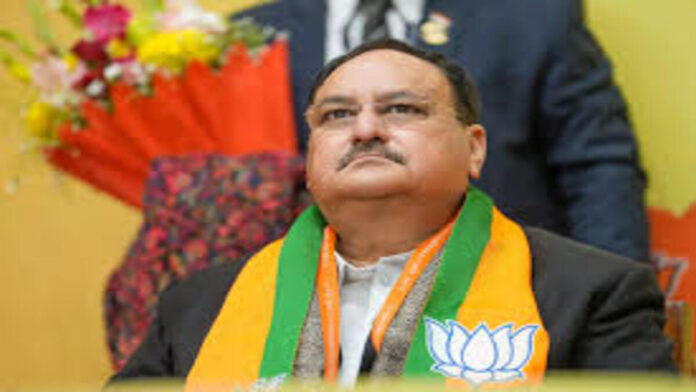 Union Minister Nirmala Sitharaman claimed on Monday that no conversations regarding the extension of JP Nadda’s term as BJP national president took place on the first day of the party’s National Executive meeting, despite rumours to the contrary.

Before the meeting, there was rumour that Nadda, whose three-year tenure as the party’s leader (after succeeding Amit Shah) is set to end on January 20 of this year, might be given another term in preparation for the LokSabha elections in 2024.

Speaking at a press conference at the NDMC Convention Centre in New Delhi, Sitharaman stated that the meeting today covered a wide range of topics, including the G20 and the Assembly elections as well as the opposition’s disparaging remarks about Prime Minister Narendra Modi.

She said, “Today a briefing was conducted on how the operations of the four states, namely Tripura, Nagaland, Meghalaya, and Karnataka, are moving.

The Minister said when asked if the meeting included discussion of Nadda’s term extension: “On that, there was no conversation. The political initiative has been discussed today.”

“Nine items included in the resolution for this year’s NEC have been thoroughly discussed. The first topic of discussion was how the opposition parties are criticising PM Modi ji in an unpleasant manner “explained Sitharaman.

The Minister claimed that the Supreme Court “crushed” and “exposed” the Opposition’s ongoing hostile efforts against the BJP and PM Modi.

“Opposition consistently waged hostile campaigns against BJP and abused terminology to criticise the prime minister on a number of subjects, including Pegasus, the Rafael deal, money laundering by the Enforcement Directorate, Central Vista, economic basis-reservations, and demonetization. All of these cases were litigated in court, and the ruling has favoured the central government. SC uncovered the disparaging campaigns of the opposition through legal answers, “She spoke.

The Minister congratulated the Prime Minister on behalf of the national executive and praised PM Modi’s leadership for improving India’s reputation on the international stage.

“Be it G20, SCO, or UN Security Council leadership, India’s reputation on the international scene is at an all-time high. It was also addressed how the PM’s reputation continues to dominate the global agenda. The national executive also praised PM Modi ji for the world’s embrace of the G20 slogan of “One Earth, One Family, and One Future” during India’s presidency. Along with thanking the PM for his initiative in UN reforms, the council “She spoke.

The party changed its “anti-incumbency to pro-incumbency” strategy in the Western state, while the margin of victory and defeat remained less than 1% in the hill state, according to Sitharaman. The party also discussed the Gujarat and Himachal Pradesh elections, which it won and lost, respectively, toward the end of last year.

“We have achieved success in Gujarat by converting anti-incumbency to pro-incumbency. This is a historic triumph, not just another one. Gujarat’s triumph will undoubtedly have an impact on subsequent elections, including the Lok Sabha elections in 2024. Although it was challenging to modify the tradition in Himachal, the margin of victory or failure was just 1%. This was also brought up, “She spoke.

“Also highlighted in Nadda ji’s speech this morning was the requirement that we triumph in all upcoming assembly elections. Workers for the BJP must adopt a resolution, “said the Minister.

The Kashi Tamil Sangaman held in Varanasi last year, the Har Ghar Tiranga campaign leading up to Independence Day in 2022, and PM Modi’s “Mann Ki Baat” were among the other topics that were covered.

“During today’s meeting, the PM’s contribution to preserving religious and traditional heritage was praised. Kashi Tamil Sangaman was also discussed. To raise the tricolour in every home, a goal of 20 crores was set. Recognized for their collaboration in creating the flag were numerous MSME sectors that took part in the event. Several textile-related industries spoke up in the national executive as well. The Prime Minister did the Sikh community a huge service by proclaiming Veer Bal Diwas “She spoke.

Party officials from four states that are going to the polls on Monday gave the senior leadership a ground report as the BJP held its National Executive meeting in the capital.

“The party leaders of the four states that are going to the polls today—Karnataka, Tripura, Nagaland, and Meghalaya—kept their state reports in the meeting and talked about them. Tomorrow’s discussion will cover five additional states that are set to have elections: Telangana, Rajasthan, Chhattisgarh, Madhya Pradesh, and Chhattisgarh “added a source.

Tuesday’s closing remarks by Prime Minister Modi will bring the gathering to a close.