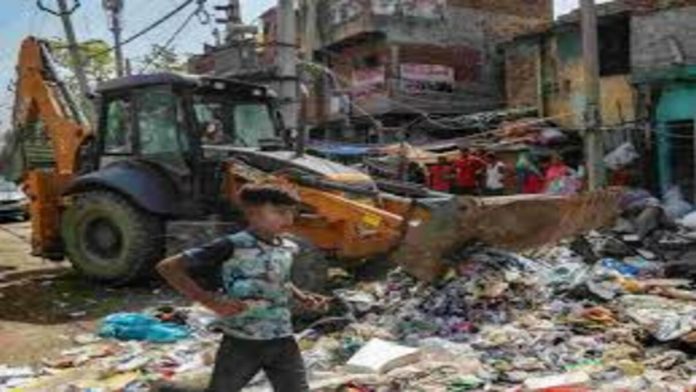 The anti-encroachment drive taken out by the North Delhi Municipal Corporation (NDMC) in Jahangirpuri against illegal construction has demolished many structures, but soon the Supreme Court stepped in on Wednesday and asked to stay on the demolition.

Meanwhile, the drive has turned into a political controversy as top leaders begun criticising it. AIMIM Chief Asadauddin Owaisi said that the drive was “targeted demolition”, and “an example of vigilante justice”. While the Congress leader Rahul Gandhi criticised the government for using the bulldozers in Delhi and Madhya Pradesh.

The drive comes after a communal violence in Jahangirpuri of Uttar Pradesh that took place during a procession on Hanuman Jayanti kicked off by stone pelting. However, the NDMC said that it rgularly takes out such drives, so a special notice need not be sent to carry out one.

After taking note of The plea of Jamiat Ulama-i-Hind that buildings of Muslim riots accused being demolished, the Supreme Court intervened in the drive and ordered to stay, however the NDMC did not stop for the first hour of the order as it claimed that it did not get the order, so the Supreme Court had to step in again before the demolition was stopped.

Meanwhile, criticising the demolition drive Rahul Gandhi tweeted, “This is a demolition of India’s constitutional values. This is state-sponsored targeting of poor and minorities. BJP must bulldoze the hatred in their hearts instead”.

The CPI (M) leader Brinda Karat, who went to the demolition varea taking the SC’s order said, “The Supreme Court ordered status quo at 10:45 am. Our lawyers Kapil Sibal and Dushyant Dave mentioned it before the court. I have come to stop this demolition….to stop the authorities from tearing the Supreme Court order to shreds (dhajjiyan udane se rokne aayi hoon)”.

As part of the drive, the Bulldozers demolished many structures close the mosque in Jahangirpuri. Many shops and businesses were also pulled down despite the owners insisted that their establishment had the sanction by the Delhi Development Authority and the local civic body.

Amid Rajasthan Chief Minister Ashok Gehlot's term in question, mode than 80 MLAs from his party resigned late night on Sunday and have submitted...
Read more
In Focus