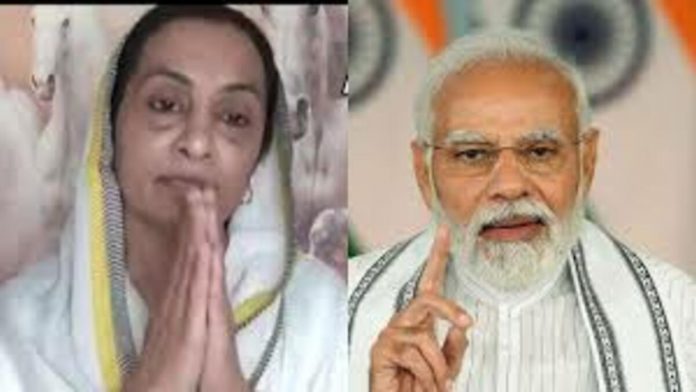 Ms Khan stated that she performs Durga Puja and recite the Hanuman Chalisa at her residence.

“However, given the rise in inflation and unemployment in the country, it has become necessary to wake up the Prime Minister of the country, Narendra Modi… If Ravi Rana and Navneet Rana can read Hanuman Chalisa outside Matoshree [Uddhav Thackeray’s residence], we should be allowed to offer Namaz, Hanuman Chalisa, and Durga Chalisa at PM Modi’s residence in Delhi,” she said.

She remarked in an interview with News Agency about her message, “I’d like to hold a prayer for everyone. If Navneet Rana wants to awaken Uddhav Thackeray’s Hindutva, then our Home Minister and Prime Minister’s Jain faith should be woken as well.”

Ms Khan admitted that her plan was aimed at preventing people from being distracted from essential topics “Way can’t keep going like this. Nobody is discussing the underlying issues. Prices are rising, unemployment is rising, and the expansion of the economy is slowing. The central government uses these acts to divert the public’s attention.”

A Mumbai court sentenced independent MP Navneet Rana and her MLA husband Ravi Rana to 14 days in judicial prison on Sunday, a day after they were arrested in connection with their plan to recite the Hanuman Chalisa outside Mr Thackeray’s home.

According to an official, the court placed the politician pair in judicial remand after rejecting the municipal police’s request for their custody.

According to the official, Navneet Rana will be sent to the Byculla women’s jail, while her husband will be taken to the Arthur Road jail.

In the meantime, 13 Shiv Sena employees were detained on Sunday for allegedly demonstrating outside the Ranas’ Khar mansion the day before. According to authorities, the party workers were eventually released on bond.

Ravi Rana, a Badnera MLA, and his wife, Navneet Rana, a Maharashtra MP, were arrested by city police on Saturday evening for allegedly “promoting hatred amongst different communities.”

Following a day-long demonstration by Shiv Sena members outside their home, the couple decided to cancel their plan to recite the Hanuman Chalisa outside Uddhav Thackeray’s home.

The Hanuman Chalisa and Azaan controversy erupted in Maharashtra earlier this month, just ahead of elections for India’s richest municipal body, the Brihanmumbai Municipal Corporation or BMC, with the BJP and Raj Thackeray’s Maharashtra Navnirman Sena (MNS) raising the issue to target the ruling Shiv Sena.

Following a call to arms by Raj Thackeray at a rally in Mumbai on the occasion of the Marathi New Year festival Gudi Padwa, BJP and MNS members in several districts of Maharashtra began playing the Hanuman Chalisa over loudspeakers.

A BJP official in the state even volunteered to fund loudspeakers so that the Hanuman Chalisa could be played in public.