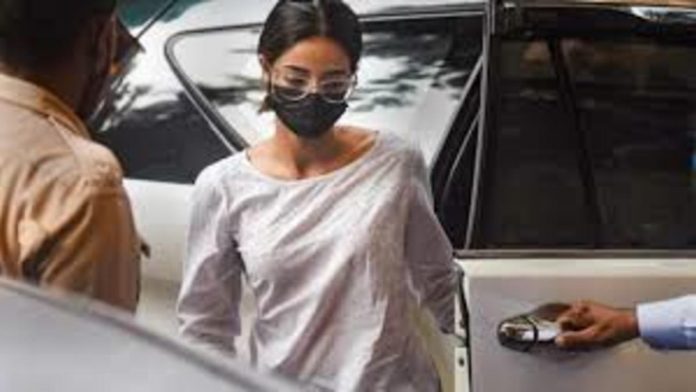 Ananya Panday, a Bollywood actor, was questioned for over four hours by the Narcotics Control Bureau on Friday in connection with her alleged WhatsApp contacts with Aryan Khan, the son of superstar Shah Rukh Khan, who was detained in a drugs case, according to NCB sources.

On Monday, the NCB summoned Ananya Panday once more, according to a senior NCB official.

Chunky Panday, her actor father, accompanied her to the NCB headquarters on Thursday, when she was questioned for the first time about talks related to the case, which involves the alleged seizure of illicit substances from a cruise ship off the Mumbai coast earlier this month.

The father-daughter duo came in a car at the anti-drug agency’s office in Ballard Estate in South Mumbai about 2.20 p.m., according to reports. The 22-year-old actor, who made her Bollywood debut in 2019, was questioned by the NCB and then left at 6.20 p.m., they added, without providing any further details.

According to NCB Deputy Director General Ashok Mutha Jain, Ananya Panday will be called again on Monday to continue the investigation. When asked if the actor has spoken about the alleged WhatsApp conversations with Aryan Khan, Jain replied he can’t discuss the probe.

When asked if he had any information regarding drug peddlers during her inquiry, the NCB officer stated he didn’t have any.
A huge number of police officers were deployed at the NCB office, where barricades were erected since a large number of journalists had gathered outside.

The NCB is investigating the cruise ship drugs case, in which Aryan Khan (23) and 19 others were arrested. Aryan Khan is being held in judicial custody and his bail application will be reviewed on October 26 by the Bombay High Court.

According to the sources, the NCB discovered certain WhatsApp communications between Aryan Khan and Ananya Panday during the inquiry. Officials from the NCB wanted to learn more about the discussions, so she was summoned on Thursday and questioned for two hours. On Thursday, the NCB seized Ananya Panday’s laptop and cellphone.

Meanwhile, in the early hours of Friday, a 24-year-old drug seller was brought to the NCB office for questioning, they added.