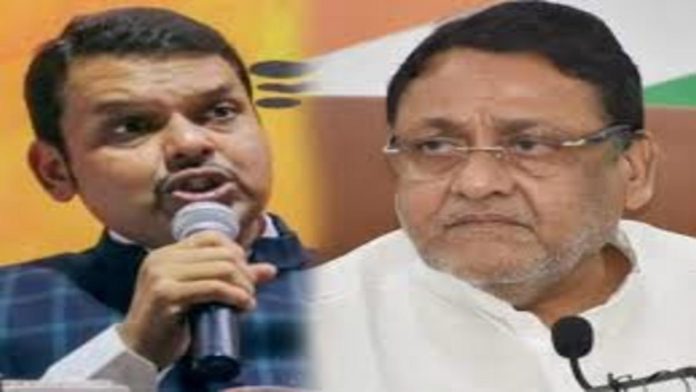 Maharashtra minister Nawab Malik has alleged former state chief minister Devendra Fadnavis of having a link with drug peddler Jaydeep Rana. He claimed this by tweeting a picture showing Amruta Fadnavis and the drug peddler in a single frame.

The picture is said to have taken during the recording of the Amrita Fadnavis river anthem project in 2018. The drug peddler aas the finance head of the project.

Delivering at the press conference Mr Malik said, “One Jaydeep Rana currently in jail in connection with a drug trafficking case has relations with former CM Devendra Fadnavis. He was financial head of the famous river song sung by former CM’s wife Amruta Fadnavis. The drug business in the state grew under his tenure.”

Taking a dig at NCB Director Sameer Wankhede, Nawab Malik said he is the chief of the drugs racket running in Mumbai and was appointed by the former chief minister Devendra Fadnavis.

The Maharashtra minister has levelled multiple allegations against Mr Wankhede, including using forged documents to secure his job and illegal phone tapping.

“Sameer Wankhede is the kingpin who is running a drug racket in Mumbai…He was appointed by (Devendra) Fadnavis,” said Mr Malik.

Nawab Malik has also alleged Sameer Wankhede of showing a fake birth certificate to get a government job, as he was Muslim by birth.

The Maharashtra minister has called the whole Mumbai cruise operation on October 2 a fake conspiracy by BJP to move “Bollywood out of Mumbai”.

“The Mumbai cruise drugs case is nothing but BJP’s bid to move Bollywood out of Maharashtra. It is a conspiracy by BJP to defame Bollywood,” he said.