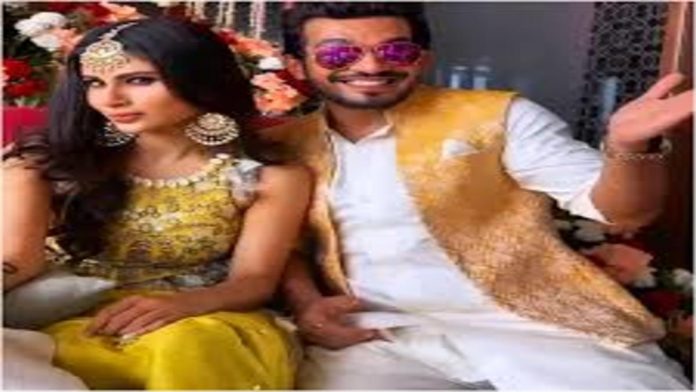 Finally! Suraj Nambiar, Mouni Roy’s boyfriend, has posted the first photo of the couple. In Goa, the two are being married today. The pre-wedding festivities for Mouni and Suraj began on January 26 and were attended by a number of well-known celebrities. Mandira Bedi, Aashka Goradia, and Arjun Bijlani, Mouni Roy’s close pals, have also posted images from her mehendi and haldi ceremonies. Mouni Roy captioned the shot with Suraj Nambiar, ” “#HariOm is everywhere. Shivay, Om Namah Shivay, Om Namah Shivay, Om Namah” Mouni is wearing a crimson Indian sari and Suraj is wearing a white kurta in the photo. Several celebrities praised Mouni Roy and Suraj Nambiar after seeing their photo. The photo currently has almost four lakh likes.

Mandira Bedi, who is also in Goa for the wedding, posted images of herself with Mouni Roy and Suraj Nambiar on Instagram and wrote, “It all starts with Mon and Suraj. I adore you both, more than you can imagine “Then there’s a red heart emoji.

Aashka Goradia uploaded images from her mehendi ceremony with Mouni Roy. Mouni Roy wore a yellow sleeveless lehenga and jewellery to the mehendi.

“LOVE YOU,” Aashka captioned a sweet selfie she shared with her husband Brent Goble.

Arjun Bijlani posted images from Mouni Roy and Suraj Nambiar’s haldi with the caption ” “I’m overjoyed!! @imouniroy, may God bless you!!” Mouni looked stunning in a white and gold Indian attire for the haldi ceremony.

According to reports, Mouni Roy and Suraj Nambiar would marry using Malayali and Bengali wedding rites.