Modi Alleges SP Of Inciting Voters In UP To ‘Seek Revenge’ 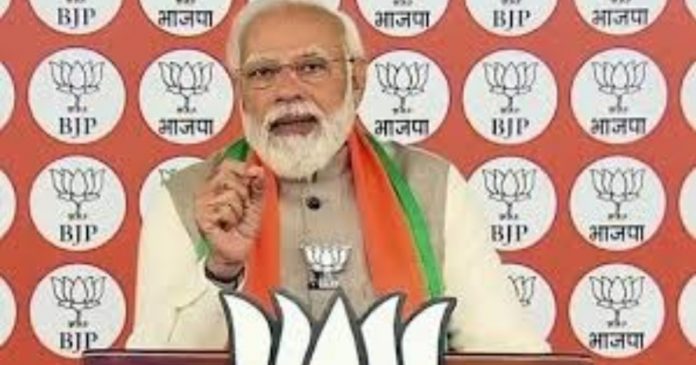 Prime Minister Narendra Modi today accused the opposition Samajwadi Party of inciting voters in Uttar Pradesh to “seek revenge” on the BJP, saying it was a far cry from the Yogi Adityanath government’s progressive objectives. He framed the debate as “Nakli Samajwad (fake socialism) versus gareeb ka sarkaar (government of the poor),” citing the BJP’s achievements at the Centre and in the state as “homes for the poor,” “backward class policies,” “medical colleges,” “greater connectivity through expressways,” “initiatives for Muslim women,” and “raising of marriage for women.”

“People nowadays have a lot of dreams. Only those who continue to sleep dream… Yogi Adityanath is awake and ready to work for the development of Uttar Pradesh “Through a Jan Choupal programme, which was his first virtual rally for the state, PM Modi made another apparent dig at Samajwadi Party leader Akhilesh Yadav.

Mr Yadav, who is the BJP’s strongest rival in Uttar Pradesh, claims that Lord Krishna appears to him in his dreams every night, telling him that he will form the state’s government.

The Prime Minister also addressed the burgeoning housing crisis in Noida and Greater Noida (Gautam Budh Nagar), saying that “corruption caused thousands of people who bought homes in the area to suffer.”

Many housing projects in the industrial region have come to a halt due to alleged builder misconduct, putting the futures of over 50,000 home buyers in jeopardy.

In the neighbourhood, where Congress’s Priyanka Gandhi Vadra began a door-to-door campaign today, he promised a “special budget to complete the incomplete flats.”

“In Uttar Pradesh, we are attempting to effect change. And the opposition is out for vengeance. Persons that have a riot mindset have been given tickets by these people, as evidenced by their behaviour. Criminals want a state administration that is friendly to them “In a virtual address to the electors of Shamli, Muzaffarnagar, Baghpat, Saharanpur, and Gautam Budh Nagar, he remarked.

On February 10, the critical Western Uttar Pradesh region votes in the first phase of the election.

“Under the Pradhan Mantri Garib Kalyan Anna Yojana, India looks after every disadvantaged household. Free food are being distributed to 15 million people. This is the same UP where supplies destined for the underprivileged were stolen from ration shops 5 years ago. Every crumb now finds its way to the poor’s homes. This is the evolution that has occurred over the previous five years “Prime Minister Modi stated.

“We now need to be concerned about small farmers… and we’ve started working on it. The rural landscape would be transformed by small farmers “He went on to mention farmer leader Chaudhary Charan Singh, the grandfather of opposition leader Jayant Chaudhary, an Akhilesh Yadav friend. Mr Chaudhary, the Rashtriya Lok Dal’s head, has a sizable following among the area’s Jat farmers, who are angry at the BJP for enacting new farm rules.

Despite the Prime Minister’s decision to repeal the farm rules, a group of farmers has pledged to vote against the BJP in state elections.