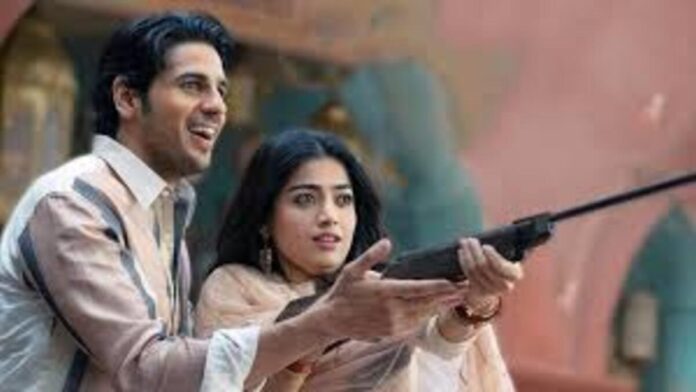 Pakistan attempts to imitate India in the race to construct the first nuclear bomb after India’s first successful nuclear test, code-named “Smiling Buddha,” in 1974. When India learns about it, it asks one of its undercover spies in Pakistan to send someone to Pakistan to investigate further. Amandeep Ajitpal Singh (Sidharth Malhotra), who goes by the identity of Tariq and makes a living as a tailor in Rawalpindi, enters with the line “Gadaar baap ka prayshchit karta hua ladka.”

He is undoubtedly the top student in his class, which is why R&AW chief RN Kao (Parmeet Sethi) selects him for this task. So how are you going to locate Pakistan’s nuclear bomb test site in 1974 without letting everyone else know? Identifying the one business that manufactures western toilets for the mission’s main character will help. As a result of Tariq’s efforts to obtain the knowledge, Nasreen (Rashmika Mandanna), with whom he is in love, is married and becomes pregnant.

The story of Parveez Shaikh and Aseem Arrora is based on “actual & real” events that are public knowledge, but because everything is so generic, it doesn’t make for an exciting movie-watching experience! Everything in the movie, from the sets designed by Rita Ghosh to the clothing worn by the characters (by Divvya and Niddhi Gambhir), reflects a highly stereotypical worldview that undermines the film’s realism.

When I say stereotypical, I mean everything you’ve “heard” about a Muslim living in Pakistan, like wearing skull caps, repeating “adaab, janab” at every moment, eating Biryani, etc. The screenplay by Sumit Batheja, Parveez Shaikh, and Aseem Arrora does credit to a few tense situations (such as aiming a gun at an important individual and cutting it), but it’s basic at its finest overall.

In any Bigg Boss season, Rakhi Sawant’s controversy and Sumit Batheja’s dialogue are comparable. Despite having a two-hour running time, Nitin Baid and Siddharth S. Pande’s editing makes you feel as though you are viewing something that has already been depicted (even better) numerous times.

For two reasons, Sidharth Malhotra shouldn’t have chosen this path after Shershaah: one, it would sow a seed of doubt in the minds of viewers about him choosing the standard “patriotic” path (tried & failed by Akshay Kumar), and second, this is a far away from Shershaah. The disguise element clashes with his performance, and the inquiry process’s shoddy writing prevents him from demonstrating his acting prowess.

Because she is blind, Rashmika Mandanna is unable to see in the movie, and we are also unable to see her because we are bored. We’re tired of seeing female actors and actresses take on roles that have the one-dimensional goal of maintaining the actors’ happiness but don’t add a single glance (pun intended!) to the plot.

The hero’s companion who will sacrifice himself towards the end of the movie is once again played by Sharib Hashmi because that is his intended outcome: to help the hero and kill himself. He’s not the only talented actor to be victimised by the bad plot; Kumud Mishra and Parmeet Sethi also suffered in the same way.

This is Shantanu Bagchi’s first movie, and in addition to that, according to IMDb, he has also created an advertisement for Nycil Cool Shower. I was aware of this since I wanted to include an espionage plot involving a “western toilet” in the movie. Putting jokes aside, it’s a respectable effort to portray a weak plot, but he could perform better with a stronger team.

Weak music The film’s half-baked thrilling passages are supported by yet another Jubin Nautiyal love ballad, yet another patriotic song centred on “Desh Ki Mitti,” and yet another background soundtrack (by Ketan Sodha) with absolutely no spark.

All things considered, Mission Majnu promotes another another patriotic episode in Indian history that merited better treatment. Sidharth Malhotra must cease acting formulaically or else prepare to meet the destiny that many Bollywood “A-listers” have.