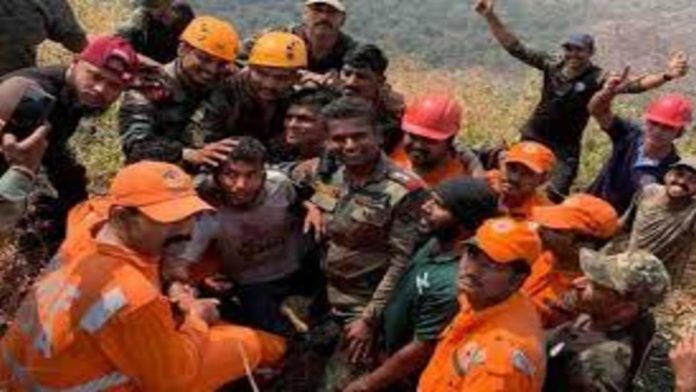 After a marathon effort by the army, a young guy who had been stuck on a hill in Kerala’s Palakkad since Monday was freed this morning.

R Babu, clothed in a T-shirt and shorts, was seen with jubilant army personnel after his rescue. Selfies were taken and the victory sign was flashed by some.

“Thank you very much, Indian Army,” R Babu stated as he sat among army personnel. As a thank you, he kisses the army members and joins the guys in shouting “Indian Army ki jai, Bharat mata ki jai.”

On Monday, R Babu and two pals climbed Malampuzha’s Cherad Hill. Babu continued climbing after his buddies gave up and made it to the top, but he slipped and became stranded between two boulders.

R Babu was previously photographed in a foetal position, perilously balanced in a small fissure.

An Army rescue squad was able to converse to the man, Chief Minister Pinarayi Vijayan tweeted this morning.

“Rescue efforts for the youth trapped in #Malampuzha Cherat hill are in full motion. Two units of the @adgpi are currently on the scene. Army personnel were able to communicate with him. Today, the rescue effort will be stepped up. The @IAF MCC helicopter is prepared for deployment “Mr. Vijayan sent out a tweet.

“Even while efforts to resuscitate R Babu continue, has issued the necessary measures to guarantee that a medical team is in place. All medical requirements will be overseen by a panel lead by the Palakkad District Medical Officer. Ambulances have been dispatched, and special treatment preparations have been established at Palakkad District Hospital. May the attempts to save R Babu be successful and concluded soon “In a Facebook post, state Health Minister Veena George stated.