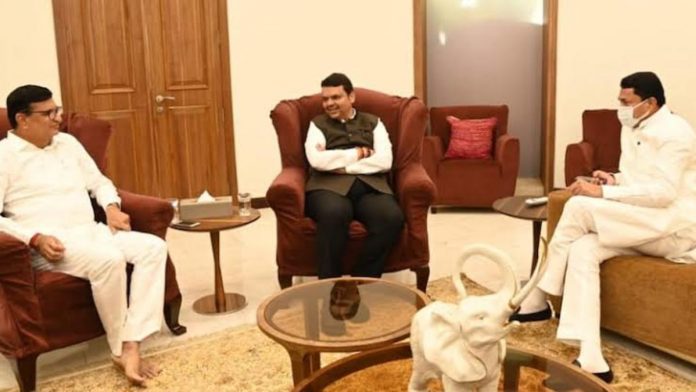 On Thursday, the Maharashtra Congress made two measures that angered Shiv Sena and NCP partners. The meeting of Congress leaders with Leader of the Opposition Devendra Fadnavis and the party’s state unit issuing a resolution against multi-member wards in urban civic bodies have brought the serious squabbling between the partners to the fore once more.

The Congress state president Nana Patole and Revenue Minister Balasaheb Thorat met with Devendra Fadnavis the day after BJP nominee Rajani Patil filed her nominations for the Rajya Sabha bypoll to beg that he withdraw the BJP candidate.

The Rajya Sabha elections were forced by the death of MP Rajeev Satav, and the Congress now wants them to be held without opposition. However, the BJP has fielded Sanjay Upadhyay against Patil.

According to sources, the BJP has agreed to consider the proposal if the suspension of 12 BJP MLAs is lifted. For two reasons, the Congress’ approach to Fadnavis has enraged the Shiv Sena and the NCP.

According to an MVA minister, the Congress should have brought the Shiv Sena and the NCP into confidence before approaching the BJP, because the candidate is not just the Congress’s, but the coalition’s as well. The nominations were filed by the leaders of all three parties.

In addition, the Congress candidate is simply positioned based on the MVA’s combined numbers. The allies are angry because the Congress conference has conveyed a message to the three alliance partners that there is a lack of trust.

If that wasn’t enough, a Congress state committee meeting held shortly after the meeting with Fadnavis passed a resolution condemning the Cabinet’s decision on multi-member wards in urban civic bodies.

The Congress passed a resolution for a two-member ward system. “After the decision by the Cabinet yesterday, several party office bearers and district presidents called and expressed concern over the multi-member ward system. Hence, we have decided to take it up with the state government and will be sending a memorandum demanding to reduce the three-member system to two members”, Nana Patole, MPCC president said.

Meanwhile, Devendra Fadnavis has dismissed the BJP’s demand to lift the suspension of 12 MLAs. “The BJP does not engage in such bargaining. Some journalists’ speculations are just that. We have filed a complaint with the court about the illegal suspension and will continue to fight it “In Nagpur, Fadnavis told reporters.