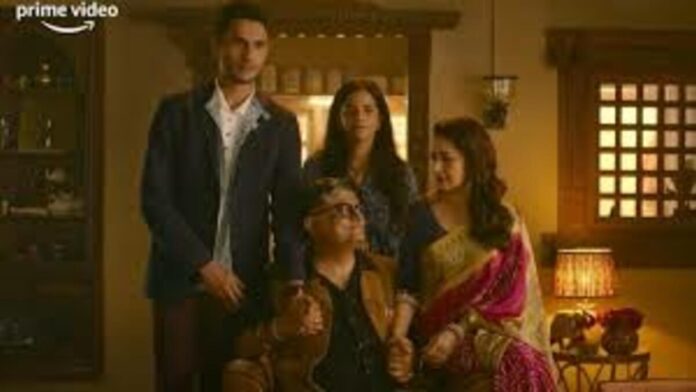 Pallavi (Madhuri Dixit) is a cheerful individual. She is the centre of her Gujarati family’s middle class and a dedicated wife and mother. While studying in the US, her son Tejas (Ritwik Bhowmik) develops feelings for a wealthy NRI Punjabi girl. He succeeds in persuading the girl’s parents, Bob (Rajit Kapoor) and Pam (Sheeba Chadha), that he is an honest man. They book a flight to India to see Tejas’ parents after getting confirmation of his intentions. Everything seems to be going well until a rumour about Pallavi threatens to derail everything and jeopardise the engagement. The movie’s premise is this, and what happens afterwards determines the plot’s course.

In essence, Maja Ma is about Tejas’ desperate attempt to win over Esha’s (Barkha Singh) strict and traditional parents. Although their archaic practises are intolerable, the family’s false accent is far worse. At one point, Pam continues by bringing out the absurdity of Bob refusing to eat or drink from a lady who is menstruating and even tries to explain the science behind it.

Despite being the ideal wife and mother, Pallavi from Madhuri’s family is unworthy. When she most needs their support, neither her kid nor her husband are there for her. Instead of showing compassion and understanding, Tara (Srishti Shrivastava), her activist daughter who is also LGBTQIA+, is prepared to coerce her mother into coming out of the closet without getting her permission.

When it comes to the performances, Madhuri Dixit makes Maja Ma. Every time she shows up, she brightens the scene, and, like Pallavi, the matriarch of the Patel family, she bears the movie on her shoulders. The talented actor Gajraj Rao once again turns forth a faultless performance. Simone Singh deserves to be singled out. She did a fantastic job as Kanchan. Both Ritwik Bhowmik and Srishti Shrivastava did a respectable job as Tejas and Tara. Barkha Singh, who most recently played the demanding bride-to-be in Masaba Masaba, portrays a lovely heroine, but her artificial accent wrecks the whole thing.

Maja Ma attempts to tell the tale of a lesbian woman who has been in the closet for more than 30 years and finally embraces her identity. It was written by Sumit Batheja and directed by Anand Tiwari. They handled the subject delicately and avoided making fun of it. The movie’s ending is sad, too. Things are not always perfect and life is not always pleasant. A little more realism would have been nice in the climax act.

Maja Ma attempted to depict a woman’s experience of coming out to her family and how she found acceptance, but the movie offers nothing novel. It would have been a more interesting watch if the creators had done more research and adopted a more realistic approach. Unfortunately, maja nahi aya!