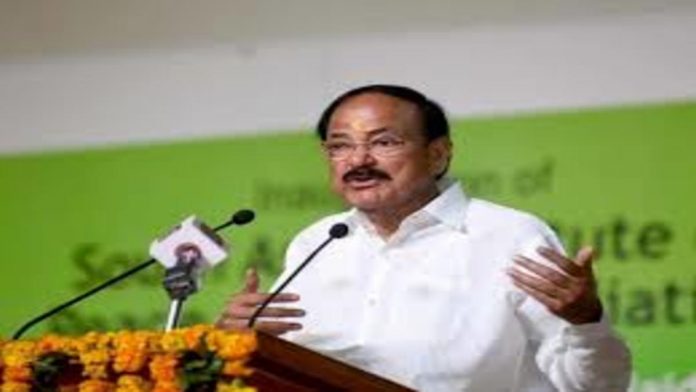 The government has been accused of saffronising education, but Vice President M Venkaiah Naidu remarked on Saturday, “What is wrong with saffron?” as he urged for the Macaulay system of education to be completely rejected from the country.

The Vice President remarked in his remarks after inaugurating the South Asian Institute of Peace and Reconciliation at the Dev Sanskriti Vishwa Vidyalaya in Haridwar that Indians must abandon their “colonial mindset” and learn to take pride in their Indian identity.

Mr. Naidu further stated that Indianization of the educational system is a key component of India’s new education policy, which prioritises the promotion of mother tongues.

“We’re accused of saffronising education,” he said, “but what’s wrong with saffron?”

In his 75th year of Independence, Naidu has called for the rejection of the Macaulay educational system, which he claims imposed a foreign language as the country’s medium of instruction and limited education to the upper crust.

“Colonial domination trained us to see ourselves as a second-class race for centuries. We were indoctrinated to disdain conventional wisdom and our own culture. As a result, our country’s progress was delayed. The imposition of a foreign language as our medium of instruction limited education to a narrow segment of society, denying a large population of their right to education,” he explained.

Thomas Babington Macaulay was a British historian who was instrumental in the adoption of English as a language of instruction in India.

“We should be proud of our ancestors, our culture, and our legacy.” We must return to our origins. We must abandon our colonial perspective and instil pride in our children’s Indian heritage. We need to be able to communicate in as many Indian languages as possible. Our mother tongue must be cherished. The Vice President stated, “We must learn Sanskrit in order to understand our scriptures, which are a treasure trove of information.”

“I am looking forward to the day when all gazette notifications are released in the mother tongue of a respective state,” he remarked, encouraging young people to spread their mother tongue. Your home tongue is like your vision, whereas your foreign language knowledge is like spectacles.” Foreign dignitaries visiting India, despite knowing English, speak in their own tongue because they are proud of their own language, he noted.

Mr. Naidu stated, “Sarve Bhawantu Sukhinah (all be happy) and Vasudhaiv Kutumbakam (the world is one family), which are ideas found in our ancient literature, are still the driving principles of India’s foreign policy today.”

“India has deep relations with nearly all South Asian countries that share shared ancestors. From Afghanistan to the Gangetic plains, the Indus valley civilisation flourished. All around the world, our principle of not attacking any country first is respected. It is the land of Ashoka the Great, the great warrior king who chose nonviolence and peace over aggression.

“There was a period when people from all over the world came to study in the old Indian institutions of Nalanda and Taxila,” the Vice President remarked, “yet even at its height of affluence, India never considered attacking any country because we genuinely believe that the world needs peace.”

He believes that, in addition to pursuing education, students should be educated to maintain intimate contact with nature. “Nature is an excellent teacher.” During the Covid crisis, you may have noted that folks who live near to nature suffered less. Nature and culture working together for a better future should be the mantra.”