Lookout Notice Has Been Sent Against Man Whose Picture Got Viral With Aryan Khan. Man Is Supposed To Be A Witness To Mumbai Drugs Case 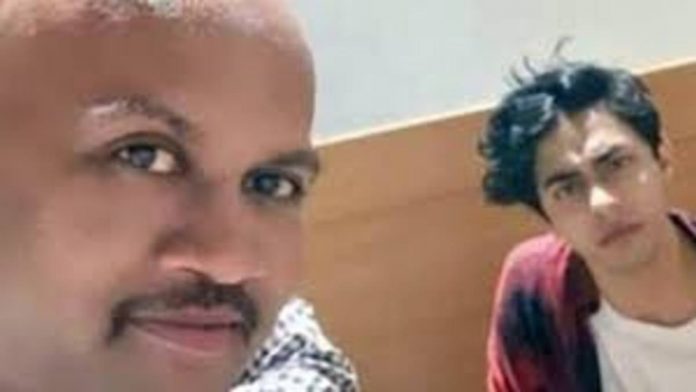 In connection with a 2018 cheating case reported in Pune, Pune police have issued a lookout circular against KP Gosavi, one of the independent witnesses of the Narcotics Control Bureau (NCB) in the cruise ship drugs seizure case, a top officer said on Wednesday.

A lookout circular is a warning that a person is not allowed to leave the country.

“We’ve issued a lookout circular notice against KP Gosavi, who has been missing since a 2018 cheating complaint was filed against him with the Faraskhana police station,” said Pune Police Commissioner Amitabh Gupta.

Gosavi is one of nine unaffiliated witnesses in the drug-related cruise ship raid in which Bollywood actor Shah Rukh Khan’s son Aryan Khan was arrested earlier this month.

Gosavi was arrested for allegedly duping a Pune man under the guise of providing him a job in Malaysia, according to police.

Chinmay told India Today TV that Kiran Gosavi had posted an advertisement on Facebook promising to provide jobs in Malaysia to those who paid him a particular amount of money.

Gosavi was sent to Malaysia after Chinmay paid him Rs 3 lakh, according to Chinmay. Chinmay, however, was not offered a position as promised by Kiran Gosavi 14 days later. As a result, he returned to India and reported the incident to the Faraskhana police station.

In 2018, Gosavi was charged under several IPC sections, including 420 (cheating), as well as pertinent parts of the Information Technology Act.