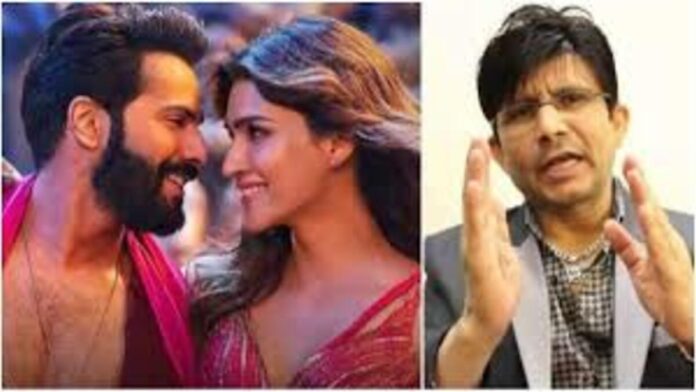 KRK never misses an opportunity to evaluate every single Bollywood movie, along with its trailer and teaser. He frequently uses Twitter to post reviews that go viral online. The self-described critic previously made headlines when he attacked Adipurush’s teaser mercilessly. The critic also criticised the producers’ subpar VFX. Varun Dhawan’s Bhediya, which was just reviewed by KRK, is making the rounds for a variety of intriguing reasons.

The movie premiered on theatre screens this morning and has received generally positive to conflicting reviews from viewers and critics.

KRK criticised the Bollywood filmmaker on Twitter by calling the Varun Dhawan-starring movie Bhediya a “Khurafat of Director’s brain” and urging them to create quality movies. KRK tweeted after seeing the first act of the movie, “It’s interval and #BhediyaMovie is a torture till here. If you want to learn, how to make road in the jungle of Arunachal Pradesh then you must watch the film. Director ने ख़ुद लिखा है Interval की जगह, कि बचकर रहना इस

KRK began to star Bhediya with 1 star as he uttered the phrase “Aa thoo.” How should I respond to #Bhediya? It’s a Khurafat of the director’s mind, not a movie! When fewer people are visiting movie theatres, filmmakers should endeavour to produce high-quality movies. But rather than making movies, they are occupied with deceiving corporate giants to make money. Only Aa Thoo 1*,” he stated in the subsequent Tweet.

Reacting to the same, a user told KRK, “U made fun of Pushpa,RRR, Allu Arjun personal attack on his looks, Drishyam bad review..all thuk k chaatna ur born habit..u r a daring self made man I respect u for tht but u r a chigat sadist as well.”