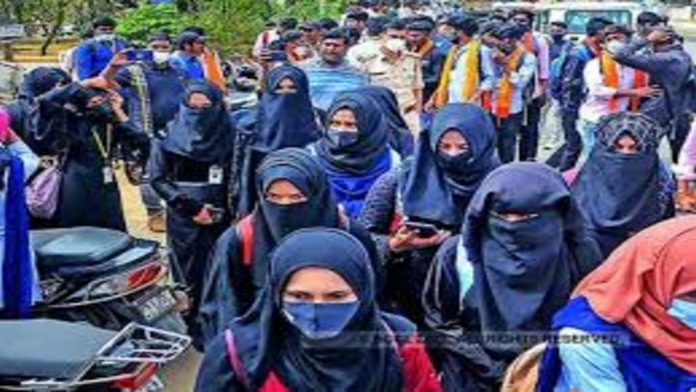 As the hijab case pends in court, karnataka government has finally opened high schools on Monday after a High Court order banned wearing of anything displaying religious identity to schools and colleges.

On Monday, the petitioners in the court argued that no educational institutions can restrict any student to follow their faith as they do not have any legal right to do so. The High Court will further hear the matter today.

Schools in Udupi, the epicentre of protests against hijab saw smooth reopening and normal attendance. However, Muslim girls were only allowed to enter the classes after removing their hijab. According to the district Tahsildar of Udupi there were no Hindu students who turned up In saffron shawls.

Police personnel have been deployed near schools in Udupi, to maintain law and order and avoid any unwanted disturbance.

However, an argument heated up between parents and a teacher outside Rotary school in Karnataka’s Mandya after students were asked to remove their hijab or headscarf.

One of parents even requested the teacher to allow students to enter the classes without removing their hijab.

Meanwhile, during the hearing of hijab case in the Karnataka High Court on Monday, advocate Kamat who is the representative of the petitioners said that the government’s statement that says that there is now protection for wearing of hijab in Article 25 is ‘totally erroneous’.

“To allow the College Development Committee to decide whether to allow students to wear headscarves or not is totally illegal. The only restriction that can be imposed under Article 25 is public order, which can only be imposed by the state. Can a college development committee consisting of an MLA and some subordinates decide on exercising fundamental freedom? How can a statutory authority be made the guardian of our fundamental rights?,”  he said.

The three-judhe bench led by the Chief Justice of Karnataka High Court Ritu Raj Awasthi, Justice JM Khazi and Justice Krishna S Dixit will resume the case hearing today. The students are allowed to attend classes without any religious dress until the case is with the court.

According to the sources, based on the Karnataka HC order, the state government is likely to introduce new guidelines on usage of hijab. The new guidelines are likely to allow the students coming in hijab and burqas to enter schools and then change into uniforms.

For this, the Chief Minister Basavaraj Bommai will meer the Education Minister BC Nagesh and officials from home and education departments to draw out the guidelines.

Higher Education Minister BC Nagesh announced that from February 16, all colleges that were shut due to protests against hijab will reopen.