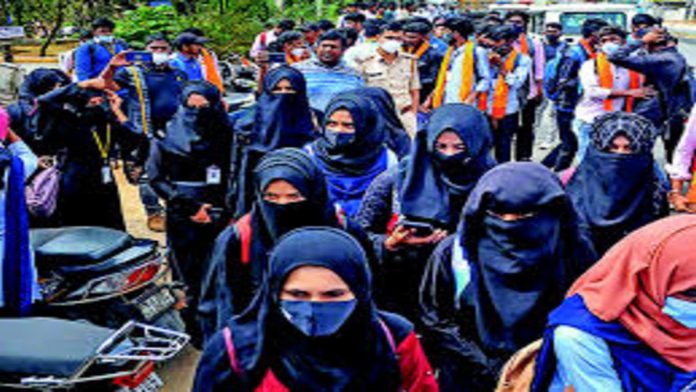 In Karnataka, the debate over headscarves has heated up, with students ignoring the government’s requirement that they wear uniform apparel to maintain “unity and equality.” Basavaraj Bommai, the Chief Minister, issued a call for peace ahead of tomorrow’s court hearing.

Six students claimed they were excluded from lessons for wearing headscarves at the Government Females PU college in Udupi district last month, prompting several Muslim girls to adopt the practise in protest.

Headscarves were objected to by right-wing groups in Udupi and Chikkamagaluru, and the protests extended across the state. As a form of revenge, many students wore saffron scarves to class. In solidarity of hijab-wearing girls, Dalit students adopted blue scarves.

There have been reports of students wearing hijab and saffron scarves to colleges in Chikkaballapura, Bagalkote, Belagavi, Hassan, and Mandya today. Girls staged a protest rally in Belagavi and Mandya. During a rally, two people were arrested for allegedly brandishing knives.

At IDSG College in Chikkamagaluru, there was also a clash between students wearing blue scarves and those wearing saffron scarves.

To avert communal strife, two colleges declared a holiday. Students at another college were allowed to wear the headscarf in separate courses.

At Kundapur’s Kalavara Varadaraj M Shetty Government First Grade College, hijab-wearing students were sent home. “We had urged them not to wear the hijab to class. They flatly refused. As a result, we asked them to leave “Usha Devi, Vice Principal, stated.

“In some educational institutions, the boys and girls have started behaving according to their religion, which harms equality and unity… clothing that undermine equality, integrity, and public law and order should not be worn,” the state’s Education Department warned on Saturday.

Students who insist on wearing hijab (head scarves) will not be admitted into government educational institutions, according to Education Minister BC Nagesh. He also ordered that female protestors be kept in a separate college room.