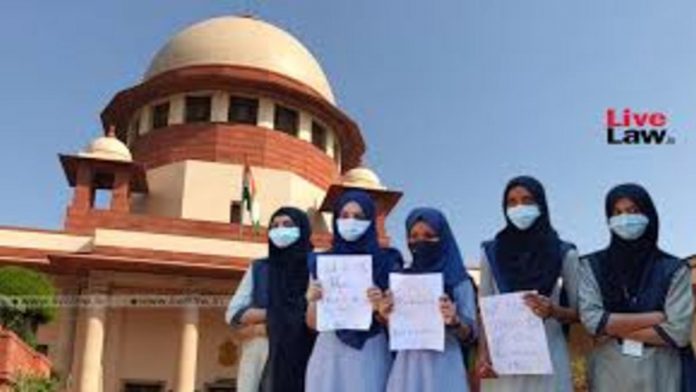 Karnataka Hight Court has again supported a ban on hijab in educational institutions on Tuesday saying hijab is not a mandatory religious practice.

The court’s verdict has been now challenged in Supreme Court by a student named Niba Naaz, who was among five who had Initially filed a petition against hijab ban.

“We are of the considered opinion that wearing of hijab by Muslim women does not form a part of essential religious practice in Islamic faith,” said Karanataka HC in it’s verdict dismissing students’ petitions.

On February 5, the state government had banned hijab saying they “disturb equality, integrity and public order” In schools and colleges.

The court also said that school uniform is a reasonable restriction that students can’t refuse to wear.

Schools have all the reasonable reasons to ban such clothes that divide students religiously or on any such grounds, said the court’s verdict.

“The aim of the regulation is to create a ‘safe space’… and the ideals of egalitarianism should be readily apparent to all students,”the court further said.

“The constitution allows us the right to profess our religion. We are shaken, we expected so much. We will not go to college without the hijab,” the students said talking to media personnel.

In their first petition the students had told the court that wearing hijab was their religious freedom guaranteed under Constitution.

In a bid to avoide tensions, Bengaluru, Mangaluru and Shivamogga have banned large public gatherings for a week and Schools and Colleges will remain close today in Udupi where the protest against hijab ban was first initiated.