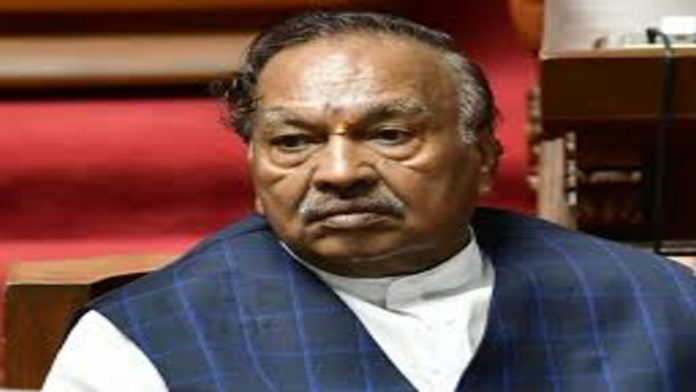 K S Eshwarappa, a Karnataka minister and senior BJP leader, announced his resignation from the State Cabinet on Friday, just two days after being named as an accused in a case involving the “unnatural death” of a civil contractor.

“In the Bommai government, I served as Minister of Rural Development. During a brief media briefing in Shivamogga on Thursday, Eshwarappa said, “I have decided today that I will resign as Minister tomorrow.”

The Minister announced his resignation “to avoid embarrassment to the BJP” and said he would submit it to Bommai in Bengaluru.

Santhosh Patil (40), the contractor, was discovered dead in a lodge in the Udupi region on Tuesday. He is suspected of ingesting poison, and the police are investigating the case as a possible suicide.

Prior to his death, Patil accused Eshwarappa and his friends of refusing to pay him for road work worth Rs 4 crore that he had completed in Hindalga village in Belagavi, and of “demanding a 40% fee.”

Bommai responded to Eshwarappa’s declaration by saying they chatted in the evening and the decision was made after “a lot of thought.”

“He stated he is completely confident that he is not involved in any way in the case and that he has the moral courage to continue, but if he does, it offers a lot of others an opportunity to talk and embarrass themselves.” He stated that this should not occur and that an investigation should be completed as soon as possible so that the truth can be revealed. “He said that if the truth is revealed, the cases against him will be dropped,” Bommai said.

Eshwarappa, a long-serving BJP politician in Karnataka and a staunch RSS supporter, is known to have had the support of the BJP’s national leadership over the years. The BJP frequently employed the OBC Kuruba community leader to oppose Lingayat strongman B S Yediyurappa’s grip over the party.

“There was no pressure from the party high command” on the topic, according to Bommai. “We notified them of the incident’s circumstances. “Eshwarappa has made his own decision to resign,” he stated.

“Let us first acquire the preliminary inquiry report,” Bommai remarked when asked about the matter being handed over to a big investigating agency.

The contractor allegedly sent messages to journalists and friends in Belagavi, where he was from, on Monday night, stating that Eshwarappa was to blame for his death.

On Tuesday night, Eshwarappa was listed as a suspect in a case of abetment of suicide filed by the Udupi Town police department in response to a complaint from the contractor’s brother, Prashant Patil.

Although Bommai had hinted that a resignation would be sought after the FIR, Eshwarappa first appeared obstinate about retiring. On March 14, the Minister claimed that he did not know Patil and initiated a slander suit against him.

On Wednesday, the Opposition Congress demanded Eshwarappa’s removal from the Cabinet and his arrest from Governor Thawarchand Gehlot. H D Kumaraswamy, the leader of the JD(S), had also demanded the Minister’s resignation.

After laying siege to Bommai’s mansion in the morning, the Congress resolved to stage a night-long protest on Thursday to demand Eshwarappa’s removal.

“Our demand is also that a case be registered under the Prevention of Corruption Act,” Congress state president D K Shivakumar said, describing the announcement as “a triumph for the people of the state.” Our second demand is that he be arrested and a legal investigation be carried out.”

At a press conference in Shivamogga on Wednesday, Eshwarappa appeared defiant. “There’s no way I’m going to resign… I’d like to inform the people of Karnataka that we must conduct a thorough inquiry to determine who is behind this scheme. He had stated, “This is my demand.”

He had stated, “There are no valid paperwork to prove that a contract was given for the Rural Development department to say that payment can be paid.”