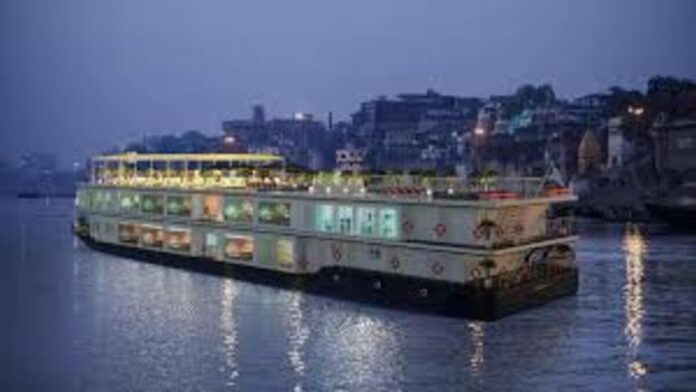 According to Union Minister Sarbananda Sonowal, the “longest river cruise service” in India will launch early the following year between Varanasi in Uttar Pradesh and Bogibeel in Assam, traveling a distance of more than 4,000 kilometers.

According to the Minister of Ports, Shipping, and Waterways (MoPSW), the route uses the Indo-Bangladesh Protocol Route (IBRP) to connect the Ganga and Brahmaputra rivers.

He said on Monday, launching a number of projects for the development of the area in and around the Bogibeel bridge in the Dibrugarh district, that the service will usher in a novel opportunity for the people of Assam to use inland waterways for promoting their trade, tourism, and for cargo transportation.

The Bogibeel Riverfront Passenger Jetty, erected by the Northeast Frontier Railways (NFR) as part of the development initiatives near the bridge, was inaugurated by the Union Minister, who also lay the cornerstone for the construction of floating jetties at Guijan and Bogibeel.

The Gati Shakti National Master plan, according to Mr. Sonowal, is helping to realize Prime Minister Narendra Modi’s objective of utilizing inland waterways as a logistics route that is both economically and environmentally sound.

“The Gati Shakti plan holds the key to use National Waterways 2 on our river Brahmaputra to fully realize the enormous potential of inland water transportation in Assam. We must seize this chance to create an economic advantage that would propel Northeast India as the nation’s new engine of growth “added he.

According to him, the BJP government is also looking into ways to develop interior navigation, river cruise tourism, and build suitable terminals along the Brahmaputra.

At an estimated cost of 8.25 crore, state-of-the-art terminals will be built at the two floating jetties located at Bogibeel in the Dibrugarh district and Guijan in Tinsukia.

The project is expected to be finished by February 2023, according to the Minister.

A restaurant, eight bio-toilets, six awnings, an open platform, and other projects are also in the works as part of the riverside development initiatives next to the bridge, he noted.

Rameswar Teli, the Union Minister of State for Petroleum and Natural Gas and Labor, and Anshul Gupta, the General Manager of NF Railways, were also present.