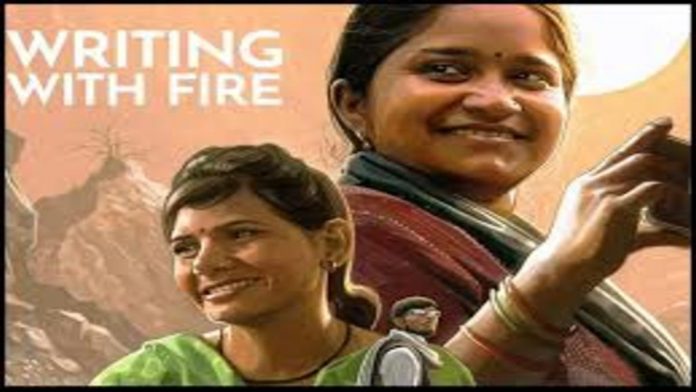 ‘Writing with Fire,’ a documentary by Delhi-based filmmakers Rintu Thomas and Sushmit Ghosh, has been nominated for an Academy Award. It has advanced to the final five in the Best Documentary Feature category of the 94th Academy Awards.

‘Writing with Fire’ is maybe the first all-India indie film to reach the final round of nominations in this category. It was one of 15 films chosen from a pool of 138 for the Oscars shortlist in December.

The Academy Award ceremony will return to its long-time home in Los Angeles’ Dolby Theatre on March 27 after being postponed last year due to Covid-19.

“We are overjoyed,” Ghosh stated. “For us and for Indian cinema, this is a watershed moment. It’s the first time an Indian documentary has been nominated for an Academy Award, therefore it’s a historic moment. Fearless Dalit women journalists are redefining what it means to be powerful in this film, which is really the storey of the modern Indian woman.”

The other four finalists in the category are Chinese-American Jessica Kingdon’s film ‘Ascension’ on the Chinese Dream; Traci A Curry and Stanley Nelson’s ‘Attica’ about the 1971 uprising at Attica prison in New York State; Jonas Poher Rasmussen’s Danish animated Afghan refugee story ‘Flee’; and Ahmir “Questlove” Thompson’s ‘Summer of the Soul (…Or, When the Revolution Could Not be Televised)’ on the 1969 Harlem cultural festival.

Since winning the Special Jury (Impact for Change) and Audience awards at the Sundance Film Festival in January last year, the documentary film, whose journey began six years ago and which spotlights the Dalit women-run newspaper in Bundelkhand, ‘Khabar Lahariya,’ mapping its print-to-digital transition, has been making headlines. Since then, it has won 28 international honours.

Another Indian documentary movie, Shaunak Sen’s ‘All That Breathes,’ won the Grand Jury Prize in the World Cinema Documentary Competition category at Sundance earlier this month.

The awards have shown the filmmakers “that when we communicate our stories, they have the capacity to ignite fresh ideas and possibilities,” as Thomas had previously stated. The film was written, directed, produced, and edited by her and Ghosh, with cinematography by Ghosh and Karan Thapliyal.

Black Ticket Films, Thomas-film Ghosh’s production company, “believes in the power of non-fiction storytelling.” Rintu and I have always been interested in magnifying stories of resistance and optimism as filmmakers,” Ghosh has previously stated.

Previously, Fali Bilimoria’s ‘The House that Ananda Built’ in 1969 and K K Kapil and Vidhu Vinod Chopra’s ‘An Encounter with Faces’ in 1979 were nominated for Best Documentary (Short Subject), and Asif Kapadia’s ‘Amy’ won Best Documentary Feature in 2016.

This year is, however, not the first time a story about Indian women has travelled to the Academy Award stage. In 2019, Iranian-American filmmaker Rayka Zehtabchi won the Best Documentary (Short Subject) for her film ‘Period. End of Sentence’ (2018), co-produced by Guneet Monga and starring Coimbatore’s “padman” Arunachalam Muruganantham, and American documentary filmmaker Megan Mylan’s Hindi-Bhojpuri documentary ‘Smile Pinki’ (2008), won the Best Documentary (Short Subject) in 2009, about a free cleft-lip surgery changing the life of a poverty-stricken five-year-old Pinki Sonkar near Varanasi.