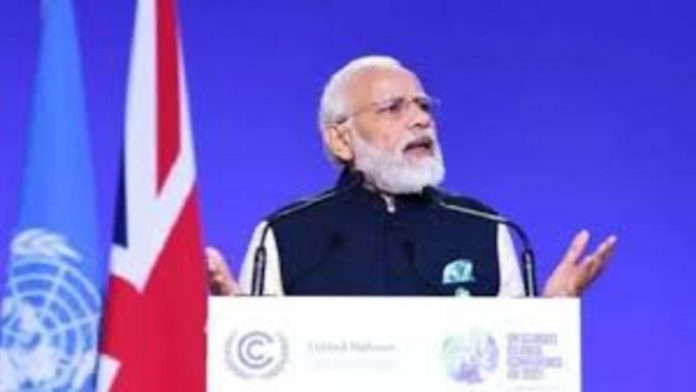 Prime Minister Narendra Modi stated at the COP26 summit in Glasgow, Scotland, on Monday that India will reach net zero carbon emissions by 2070, putting the country 10 years ahead of China and 20 years ahead of the United States and the European Union.
The vow was one of five made by the Prime Minister at the UN Conference, and it goes two decades beyond what scientists think is needed to avoid catastrophic climate impacts.

“Third, from now to 2030, India will reduce overall anticipated carbon emissions by one billion tonnes,” the PM stated.

“Fourth, by 2030, India’s economy will have a carbon intensity of less than 45 percent,” he stated.

“Fifth, India will reach net zero emissions by 2070,” he continued.

“Net zero” refers to a balance in which greenhouse gas emissions that raise global temperatures persist but are offset by the absorption of an equivalent quantity from the atmosphere. It is regarded as a watershed moment in climate action pledges.

PM Modi defended India’s net zero goal, which puts it well behind other polluters, saying the government has been keeping its promises “in spirit and word,” noting that the country had 17 percent of the world’s population but only 5% of global emissions.

In addition, the Prime Minister called for a global campaign to encourage people to adopt sustainable lives “rather than mindless and destructive consumption.”

The United States, the United Kingdom, and the European Union have established a goal of reaching net zero emissions by 2050, at which point they will only produce greenhouse gases that can be absorbed by forests, crops, soils, and emerging “carbon capture technologies.”

Both China and Saudi Arabia have established 2060 targets, but critics argue that these are mostly useless without immediate action. To avoid the worst effects of climate change, scientists estimate we need to cut global emissions in half by 2030 and reach net-zero by 2050.