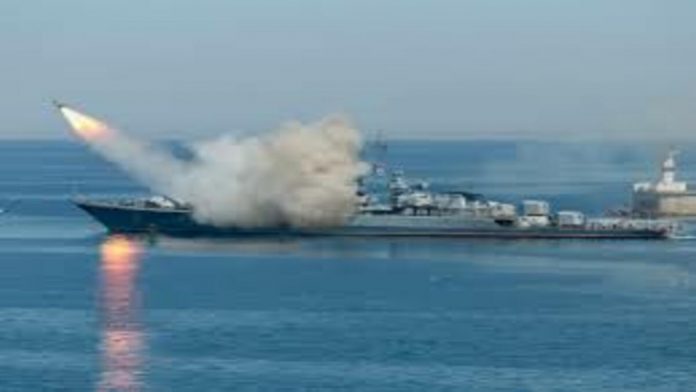 The guided-missile destroyer INS Delhi successfully tested a BrahMos supersonic cruise missile. The anti-ship variant of the missile was tested onboard the INS Delhi using an enhanced modular launcher.

“Successful maiden BrahMos firing by INS Delhi from an upgraded modular launcher once again demonstrated long-range strike capability of BrahMos along with validation of integrated Network Centric Operations from frontline platforms,” the Indian Navy tweeted along with a video of the test fire.

Officials from BrahMos told news agency ANI on Wednesday that a missile (without a warhead) fired on Tuesday at a speed of around 3,000 kmph blew a hole in the abandoned ship.

“On April 19, the Indian Navy warship INS Delhi test-fired a BrahMos supersonic cruise missile.” The missile’s lack of a warhead blew a hole in the stricken ship. The missile travels at a speed of roughly 3,000 kilometres per hour, making it impossible for air defence systems to intercept,” officials stated.

The Indian Air Force (IAF) successfully tested a BrahMos supersonic cruise missile from a Sukhoi fighter jet on the Eastern seaboard on the same ship on Tuesday, demonstrating its operational readiness.

The “live fire” of the missile was done in close cooperation with the Indian Navy, according to the Indian Air Force.

Officials stated the missile hit the target with pinpoint accuracy and precision. The ship sank after a warhead-carrying missile struck it directly.

“The #IAF fired a #BrahMos missile from a Su30 MkI aircraft on the Eastern Seaboard today. The missile hit the target, a decommissioned #IndianNavy ship, with a direct hit. The mission was carried out in close collaboration with the Indian Navy (@indiannavy) “In a tweet, the IAF stated.

The government chose in 2016 to integrate the Brahmos’ air-launched variant onto approximately 40 Sukhoi fighter jets. The project was designed to improve the IAF’s ability to strike any target on land or at sea from long ranges.

On March 5, the Indian Navy successfully tested an advanced version of the Brahmos supersonic cruise missile from a stealth destroyer in the Indian Ocean.

The missile was launched from the INS Chennai, a stealth destroyer.

BrahMos Aerospace, an India-Russian joint venture, produces supersonic cruise missiles that can be launched from submarines, ships, aircraft, or land platforms. BrahMos missile flies at a speed of 2.8 Mach or almost three times the speed of sound.

The range of the advanced version of the missile is learnt to have been extended to around 350 km from the original 290 km.