India Never Posed Any Danger To Any Nation, It Continues To Care About Whole World, Says PM Modi From Red Fort 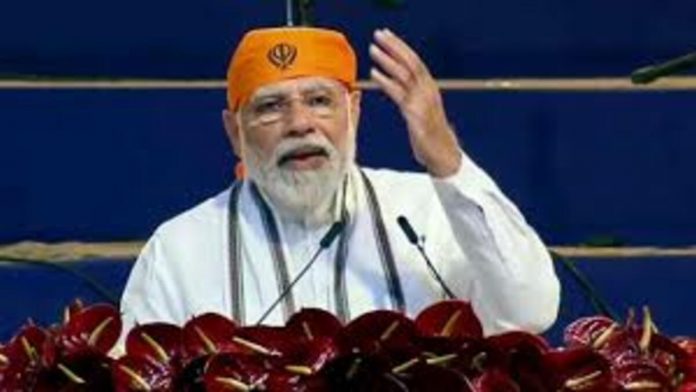 Prime Minister Narendra Modi said on Thursday that India has never posed a danger to any nation or civilization, and that it continues to care about the wellbeing of the whole globe, even in the midst of global wars.

“This sacred Gurudwara reminds us of Guru Tegh Bahadur ji’s noble effort to safeguard our wonderful tradition. There was a religious fanaticism storm raging throughout the nation at the time. People who had perpetrated violence and atrocities in the name of religion were confronting India, which saw religion as a subject of philosophy, science, and self-reflection “he said

He stated that there was a huge hope for India’s identity to be saved at the time in the shape of Guru Tegh Bahadur.

The prime minister said that although Aurangzeb and other dictators may have murdered countless people, our religion could not be removed from us.

Many generations of Indians have been motivated by Guru Tegh Bahadur’s sacrifice to live and die for the honour and respect of their culture, he added.

Enormous powers have faded away, big storms have subsided, but India is eternal and progressing, according to Modi.

“No nation or civilization has ever seen India as a danger. Even now, we consider the well-being of the whole globe. When we speak about a self-sufficient India, we have the whole world’s growth in mind “he said

To commemorate the anniversary, the prime minister published a commemorative coin and postage stamp.

The emphasis of the show was on the teachings of the ninth Sikh guru, who gave his life to safeguard religion, human values, goals, and beliefs throughout history.

His sacrifice is commemorated in Gurdwara Sis Ganj Sahib in Delhi, which was erected on the location of his beheading, and Gurdwara Rakab Ganj, which was the place of his cremation. His legacy acts as a powerful unifier for the country.

According to Ministry of Culture authorities, the fort was selected as the location for the ceremony since it was from here that Aurangzeb issued orders for Guru Tegh Bahadur’s death in 1675.

A langar was also hosted, as well as performances by 400 Sikh musicians.