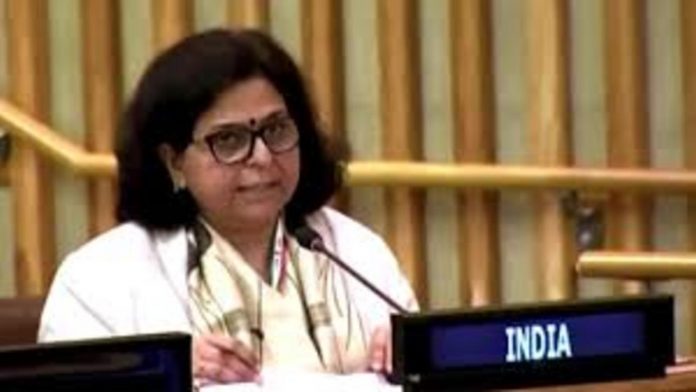 Pakistan was chastised by India for “misusing” UN venues to “promote false and vicious propaganda against” the country. This was in reaction to Pakistan’s envoy raising the topic of Jammu and Kashmir before the United Nations Security Council (UNSC) during a discussion on ‘Maintenance of International Peace and Security Through Preventive Diplomacy.’

Pakistan “has been universally recognised as one openly sponsoring, training, financing, and arming terrorists as a matter of State policy,” according to Dr Kajal Bhat, counsellor and legal adviser at India’s Permanent Mission to the United Nations.

India, on the other hand, stated that it “desires normal neighbourly ties with all countries, including Pakistan,” but that it will continue to fight cross-border terrorism with firmness and determination.

“I’m forced to take the floor once more to respond to some inane remarks made by Pakistan’s delegate earlier today. This isn’t the first time a Pakistani representative has used UN platforms to spread false and malicious propaganda against my country, attempting in vain to divert the world’s attention away from the sad state of his country, where terrorists get a free pass while ordinary people, particularly those from minority communities, have their lives turned upside down “Kajal Bhat expressed herself.

Pakistan “has the ignoble record of sheltering the biggest number of terrorists outlawed by the UN Security Council,” Kajal Bhat added.

“Members of the UN Security Council are aware that Pakistan has a long history of harbouring, helping, and actively supporting terrorists. This is a country that has been exposed as openly supporting, training, financing, and arming terrorists as a matter of state policy around the world “Kajal Bhat expressed herself.

Kajal Bhat said the union territories “would always be an important and inalienable part of India” as a response to Pakistan over the issue of Jammu and Kashmir. She also demanded that Pakistan withdraw from all regions under its illegal occupation as soon as possible.

“I’d like to be quite clear about India’s viewpoint. The Union Territories of Jammu and Kashmir, as well as Ladakh, have always been, and will continue to be, an intrinsic and inalienable part of India. This comprises places that are under Pakistan’s illegal occupation. We demand that Pakistan withdraw from all territories under its unlawful occupation as soon as possible “Kajal Bhat expressed herself.

India wants “normal neighbourly relations with all countries, including Pakistan,” according to Kajal Bhat, and is “committed to resolving remaining concerns, if any, bilaterally and peacefully in accordance with the Simla Agreement and the Lahore Declaration.”

“Any genuine discourse, on the other hand, can only take place in an environment free of panic, animosity, and violence. Pakistan is responsible for creating such an environment. India will continue to take robust and decisive action against cross-border terrorism until then “Kajal Bhat expressed herself.