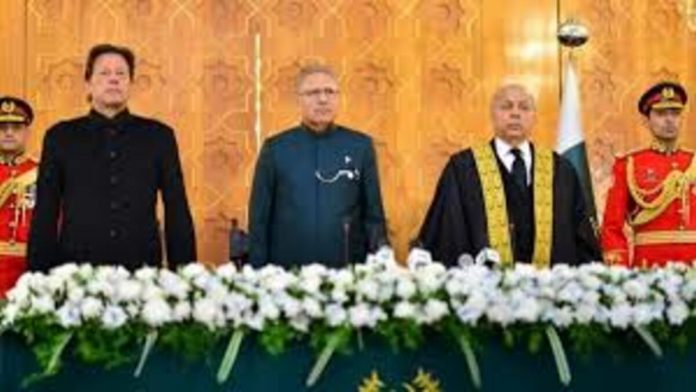 “In response to the President’s letter, Prime Minister Imran Khan has nominated former Chief Justice of Pakistan Justice Gulzar Ahmed for the post of caretaker Prime Minister after consultation and approval from the PTI Corps Committee,” PTI tweeted.

In the Panama Papers case, he was part of a five-judge panel that disqualified former Prime Minister Nawaz Sharif. He made headlines on several occasions as a result of his harsh judgments and remarks directed at governments and bureaucrats.

Justice Ahmed had also ordered authorities to rebuild a temple in northwest Pakistan that had been vandalised by a mob, and to retrieve the money for the restoration work from the perpetrators, whose behaviour had brought Pakistan “international shame.”

Last year, he also attended a lavish function at the restored temple to commemorate the Hindu festival of Diwali and express solidarity with Hindus.

According to the government, the National Assembly has been dissolved, and elections will be held in Pakistan within the next 90 days.

Meanwhile, the opposition has taken the case to the Supreme Court, which is currently hearing the petition for dissolution of the legislature.

On Monday, the Supreme Court dismissed Pakistan People’s Party’s request for a full court, with the Chief Justice declaring, “If you object to the bench, we will get up and leave.”

The creation of the bench is the Chief Justice’s prerogative, according to Pakistani Foreign Minister Shah Mahmood Qureshi.

The case has included Pakistan President Arif Alvi, the Supreme Court Bar Association, and all political parties as respondents. Lawyers from both the Imran Khan-led administration and the opposition submitted their arguments in response to the deputy speaker’s decision.

As the case began, Chief Justice Bandial stated that the court will issue a “reasonable order” on the matter.

What the judges had to say:
Chief Justice Bandial stated that the no-confidence resolution cannot be rejected even if the speaker of the National Assembly invokes Article 5 of the Constitution. He went on to say that the law plainly stated that a debate be had before voting on the no-confidence vote, but that it was not held.

Justice Ahsan stated that there were irregularities in the no-trust resolution proceedings.

Justice Akhtar questioned whether the deputy speaker had the constitutional power to make such a decision. He pointed out that only the speaker has the authority to make the decision.

The united opposition’s lawyer, Farooq H Naek, urged with the court to reach a decision on the case today. The bench, however, refused to do so, claiming that it was impossible to reach a resolution today because the Supreme Court’s decision would have far-reaching implications.