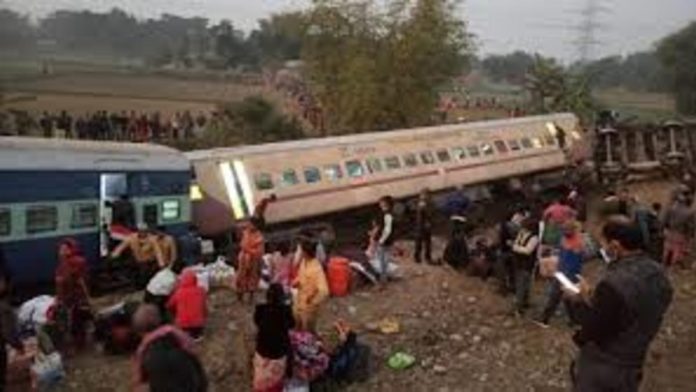 “I fell off my berth and everything went blank,” said a survivor of the Bikaner-Guwahati Express train, which derailed in West Bengal’s New Jalpaiguri area on Thursday, killing eight people and injuring dozens more. The train’s twelve carriages jumped the tracks, and several of them overturned near Domohani.

According to an NFR spokesperson in Guwahati, the accident happened around 5 p.m. in an area under the Alipurduar division of the Northeast Frontier Railway. Under the collision, a half damaged coach was perched atop another, and a couple bogies had hurtled down the slope and flipped.

Hundreds of people from neighbouring villages flocked to the scene, offering assistance to those trapped inside the collapsed coaches. Under the impact, some of the bogies separated from the rest of the train, and some wheels broke off.

“It was around 5 pm; I was speaking to my wife over the phone. All of a sudden, I heard a loud sound and there was a heavy jerk. I was thrown away from my berth and went blank. Later, when I regained consciousness, I was being taken inside an ambulance,” Sanjoy, a survivor, told a news channel.

Some of the survivors were searching for their near and dear ones who were with them inside the train when the accident happened. “My mother and I were having tea, when all of a sudden there was a sound followed by a severe shock and luggage kept on upper berths tumbled all around. The locals later rescued me, but I am yet to locate my mother. I don’t know what happened to her,” said another injured person.

According to the latest information, 50 people have been evacuated so far, with four injured being taken to Jalpaiguri district hospital and 16 being taken to Moynaguri government hospital.

Manohar Pal, a local who was among the first to arrive at the scene and assist in the rescue efforts, claimed he was at a tea shop with his pals when they heard a huge noise.

“We initially thought it was some sort of a blast. But as we rushed towards the source of the sound, we saw train coaches mangled with each other. We heard people screaming from the derailed coaches. We immediately tried to pull them out,” he said.

According to preliminary findings, the accident could have been caused by a crack in the railway tracks, according to Basu. The situation was described as “unfortunate” by Ashwini Vaishnaw “and stated that the rescue squad is on the scene, as well as officials.

Meanwhile, the Indian Railways has announced ex-gratia payments of Rs 5 lakh to those murdered, Rs 1 lakh to those badly injured, and Rs 25,000 to those who suffered lesser injuries.