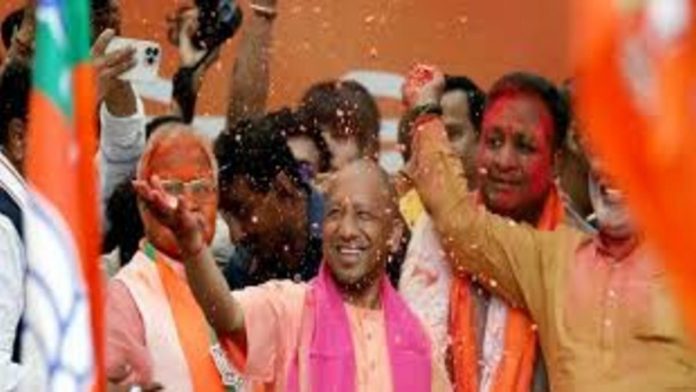 More than half of Uttar Pradesh’s new cabinet led by Chief Minister Yogi Adityanath are freshers and the party has picked ministers from all castes to maintain a balance hoping to leave behind all it’s rivals BSP, SP and others in 2024 Lok Sabha elections.

As SP strategized to select non-Yadav OBCs, the BJP has now included 19 ministers of different OBC categories – Yadavs, Gujjars, Nishad and Kurmis.
And against BSP which battled on Dalit background, the BJP is now aiming at capturing the Dalit base by electing eight members from Dalit community who include Former IPS officer Arun Asim and former Uttarakhand Governor Baby Rani Maurya.

Also the saffron party has not taken any chance with its main upper class votes as it has appointed another Brahmin community member Brajesh Pathak as Deputy Chief Minister replacing Dinesh Sharma. Keshav Prasad Maurya has also been retained as the other Deputy CM despite losing from Sirathu.

As it’s belief of having caste balance to be on top, the BJP has perfected this by appointing – CM Yogi Adityanath (Thakur), CM Pathak (Brahmin), Deputy CM Maurya (OBC) and Cabinet Minister Baby Rani Maurya (Dalit).

In 2017, when the Yogi government took over power for the first time, it had 47 members including, seven Brahmins, six Rajputs, 14 OBCs, four (Baniya/Vaishya), two Bhumihars, however this composition was changed later.