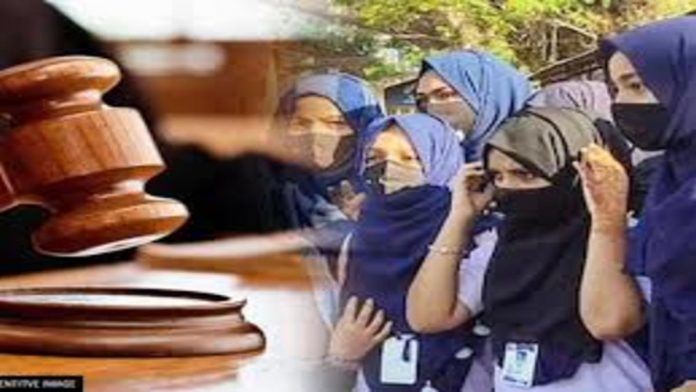 After a single-judge bench of the Karnataka High Court decided to refer the pleas to a larger bench because the case involved larger Constitutional issues, the Chief Justice of Karnataka High Court on Wednesday formed a three-judge bench, including himself, to hear a batch of petitions challenging a ban on the use of hijabs in a few pre-university colleges in the state.

The three-judge court, known as a full bench of the High Court, will be led by Chief Justice Ritu Raj Awasthi and will comprise Justice Krishna S Dixit, who referred the case to a larger bench, and Justice Khazi Jaibunnisa Mohiuddin. Justice Mohiuddin is a female judge who was appointed to the High Court as an additional judge in March of last year.

On behalf of 18 girls from colleges in the Udupi district, the special bench will hear five petitions on the hijab issue on Thursday.

Significantly, the formation of a larger panel goes against Karnataka High Court guidelines, which state that only a two-judge court can refer a case to a full bench. A layer of intra-court appeal is also removed with the larger bench hearing. A single-judge bench’s decision can be appealed to a two-judge High Court bench, while a full bench’s decision can only be contested in the Supreme Court.

“This court, after hearing the matter for some time is of the considered opinion that (given) the enormous public importance of the questions involved, the batch of these cases may be heard by a larger bench if the Honorable Chief Justice decides, in his discretion,” Justice Dixit’s single-judge bench said in an order earlier on Wednesday.

“The jugular vein of all of these issues is whether hijab wearing is a part of vital religious practise in Islam. Petitioners rely on three decisions of three neighbouring High Courts (Bombay, Madras, and Kerala), which the respondent-state also seeks to rely on, as well as many decisions of the Apex Court, to make an affirmative claim. In his order, Justice Dixit stated, “The abovementioned question, as well as others, must be considered in light of constitutional guarantees to religious minorities.”

Arguments for an interim ruling enabling the students to attend school for the final two months of the current academic year were first approved by the single-judge bench. However, because the state government and petitioners’ attorneys were unable to reach an agreement, the court decided to submit the issue of interim relief to a bigger bench as well.

The verdict came after two days of rising tensions and protests across Karnataka over the matter, which resulted in at least 15 people being arrested for “breaching peace and harmony” across the state.

The Bengaluru Police enforced a two-week ban on rallies and protests around schools and colleges in the city on Wednesday, a day after the state suspended all high schools and universities for three days to defuse the situation.

Prohibitory orders were also issued in sections of Davangere, Shivamogga, and Bagalkot on Tuesday, following reports of violence between competing factions. On Tuesday, a bandh was observed in Bagalkot’s Rabkavi-Banhatti town, where a college teacher was hurt in a stone-throwing incident by students.

The single-judge bench of Justice Dixit in the High Court on Wednesday stated right away that the objections filed on behalf of Muslim girls from an Udupi pre-university institution and a PU college in Udupi’s Kundapura constituted issues that required a larger bench to consider.

“All of these concerns primarily pertain to the prohibition of the Hijab (headscarf) while prescribing the uniform for students who profess the Islamic faith,” the decree continued. The management of institutions is authorised to prescribe uniform, subject to certain circumstances, under Rule 11 of the existing rules established under the Karnataka Education Act, 1983. The recent Government Order of 05.02.2022, which ostensibly makes this rule easier to execute, is also being challenged.”

Prabhuling Navadgi, the state advocate general, stated that the “petitions were misconceived.” According to him, the government regulation does not mandate uniforms and instead leaves it up to colleges to decide. “Autonomy has been granted to each institution.” As a result, a prima facie case cannot be established,” he said.

Wearing the headscarf, according to the AG, is not an important religious practise. He said that permitting the girls to wear the hijab to college for two months — till the end of the current academic year — would effectively settle the case in their favour.

Senior counsel Sajjan Poovayya, representing the Udupi College Development Council, which is chaired by a local BJP MLA, contended that the uniform was mandated after consultation with all stakeholders and that there had been no complaints up until January of this year.

Meanwhile, the protests and violence that occurred on Tuesday have sparked a political verbal war.

D K Shivakumar, the state Congress chairman, said that a BJP minister from Shivamogga was involved in acquiring and distributing saffron shawls and headgear used by students during anti-hijab protests. He further claimed that students at a Shivamogga college placed a Hindutva flag on a pole designated to fly the national and state flags on important occasions.

The pro-hijab protests in Udupi were allegedly orchestrated by “secret hands,” according to State Home Minister Araga Jnanendra, who belongs from Shivamogga. The girls were “secretly instructed by a group to raise the hijab issue as there were no concerns prior,” according to Udupi BJP MLA Udupi Raghupathy Bhat.