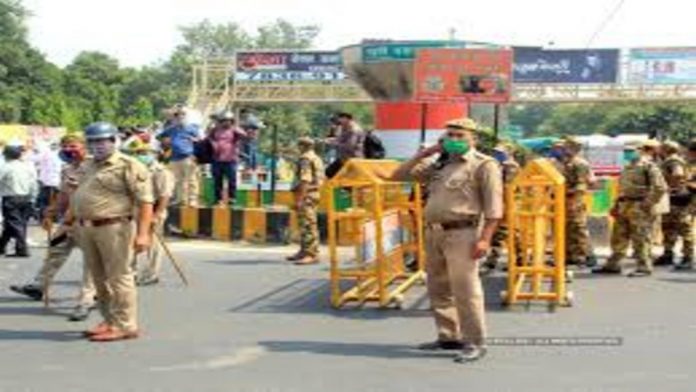 During the 10-hour Bharat Bandh organised by the Samyukt Kisan Morcha (SKM) on Monday, farmers protesting the three central farm legislation blocked highways and railway tracks, disrupting traffic in numerous locations, as police deployed in Haryana and Delhi. In light of the Bharat Bandh, police in Delhi and Haryana increased security in border regions of the national capital, and a senior police officer said adequate security plans had been taken to preserve peace and order and prevent any untoward occurrence.

According to police sources, patrolling has been stepped up and more soldiers have been stationed at picket lines, particularly on all highways leading to Delhi through villages, near border areas and every vehicle entering the national capital is being thoroughly checked. “In view of Bharat Bandh, adequate security arrangements have been made as a precautionary measure. Pickets at the border areas have been strengthened and all vital installations, including India Gate and Vijay Chowk, have adequate deployment,” deputy commissioner of police (New Delhi) Deepak Yadav said.

No protester is being allowed to enter Delhi from the three protest sites at the city’s borders, the official said. “The security is preventive and we are fully alert. There is no call for Bharat Bandh in Delhi, but we are watching the developments and adequate number of personnel are on the ground,” another officer said.

Farmers in Punjab have squatted at Rajpura, Bahadurgarh Toll Plaza, southern bypass, and railway tracks in Patiala and Nabha, blocking the Chandigarh-Bathinda road in various places. A few passenger trains destined for Ambala Cantonment and beyond are also claimed to be stalled at the Yamunanagar-Jagadhri railway station, although the Ambala Railway Division has yet to issue an official statement.

In Hisar, Bhiwani, Rohtak, Jind, and other parts of Haryana, the majority of shops and establishments stayed closed. Farmers gathered at the Rohad toll plaza with trucks and tractors to block the Rohtak-Delhi highway, while other groups blocked the Rohtak-Chandigarh highway, the Hisar-Chandigarh highway at Jind, and the Hisar-Rohtak highway near the Madina toll plaza. Protesters also squatted on railway tracks in Jhajjar’s Bahadurgarh, Dadri’s Fatehgarh village, and Hisar’s Ramayana toll plaza, among other places.

Security has been strengthened at the Singhu and Tikri borders, where farmers have been camping for the past year, according to police authorities. Metro stations from Tikri to Bahadurgarh have closed their entrance and exit gates, causing transit to Delhi to be difficult.

SKM leader Inderjit Singh said the Bharat Bandh is being observed to send a message to the Centre to repeal the three farm laws. “We have appealed to shopkeepers, small factory owners to shut down their establishments in support of farmers till 4pm. Doctors, medical staff and those going for an emergency can pass through. We have occupied highways and railway tracks to raise our voice,” he added.

Rakesh Tikait, a spokesperson for the Bharatiya Kisan Union (BKU), claimed earlier in the day that emergency vehicles are allowed to travel on the roadways. “Ambulances, doctors or those going for an emergency can pass through. We’ve not sealed down anything, we just want to send a message,” Rakesh Tikait said.

Protesting farmers will observe the Bharat Bandh until 4 p.m.