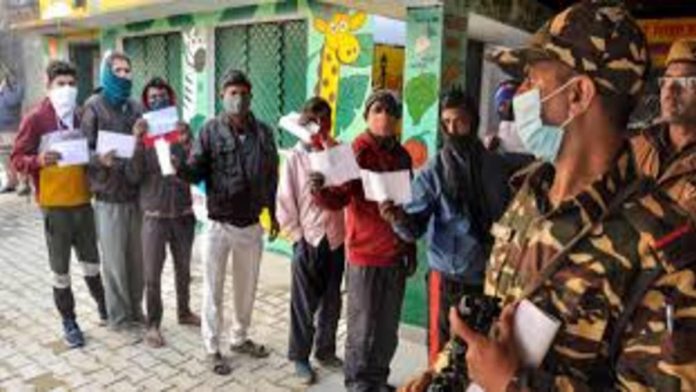 Today, voters in 55 constituencies across nine districts in Uttar Pradesh will go to the polls, amid an increasingly strident and polarised campaign. Goa and Uttarakhand, two additional BJP-ruled states, are also holding elections.

In the politically important state of Uttar Pradesh, extra attention is being paid to eight critical constituencies in the districts of Bijnor, Sambhal, and Saharanpur. The areas, which are considered Samajwadi Party strongholds, have a sizable Muslim population.

A single-phase election is taking place in Goa and Uttarakhand. Goa’s 40 seats and the hill state’s 70 seats are up for election.

Azam Khan, a senior Samajwadi Party leader, Dharam Singh Saini, a former BJP minister who converted to the Samajwadi Party, and Suresh Khanna, the state’s finance minister, are among the noteworthy candidates in this phase. Azam Khan has been fielded from Rampur, his stronghold, and is campaigning from behind bars.

Chief Minister Dhami and his wife have been charged with breaking the model code of conduct in the hill state after visiting polling booths wearing scarves with the BJP insignia.

Despite being a small seaside state with only 40 seats, the election in Goa has drew the most attention after the surprising result in UP in 2017, when the Congress won the most seats but the BJP formed the government. Arvind Kejriwal’s Aam Aadmi Party and Mamata Banerjee’s Trinamool Congress are both in the running this time, hoping to expand their reach beyond Delhi and Bengal.

In Panaji, Utpal Parrikar, a BJP renegade and the son of late Manohar Parrikar, will run as an Independent against BJP candidate Atanasio Monserrate. Elvis Gomes, a veteran bureaucrat and AAP’s chief ministerial candidate in 2017, has been nominated by the Congress. Valmiki Naik has been named to the AAP team for the third time.

In Goa, the Trinamool Congress has been actively recruiting. The Aam Aadmi Party, which did not win any seats in the 2017 Goa elections, argues that this time they are more prepared.