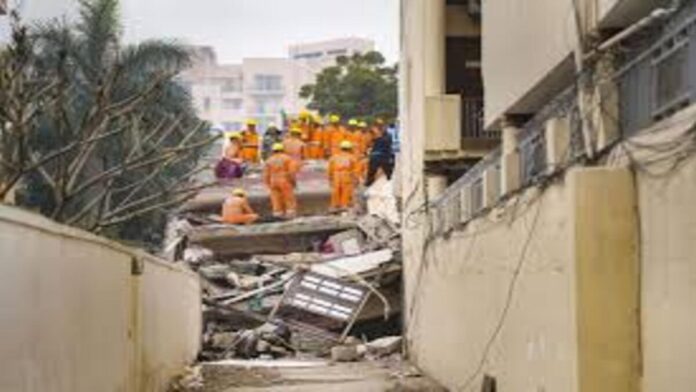 Following the collapse of a four-storey residential building in Lucknow the previous evening, three more victims were rescued on Wednesday. With their rescue, a total of 15 people have now been removed from the collapsed structure. All the injured victims have been sent to a local hospital.

One more confirmed individual is still trapped under the debris, according to officials.

Earlier this morning, Uttar Pradesh DGP DS Chauhan stated that they had a “certain clue” that three more people are trapped inside the debris. He informed that “operations will continue for at least five hours more.”

After starting almost 12 hours ago, the shift changes of the NDRF and SDRF are now being carried out, Chauhan continued.

No casualties have been reported thus far, according to the DGP.

According to Chauhan, no one has been arrested in this matter to date, but “strictest of action” will be taken against anyone proven to be accountable. He emphasised that the rescue effort is still the major priority right now.

Around 7 o’clock on Tuesday night, the tragedy occurred, and at first, at least 30 to 35 persons were thought to be trapped. As soon as the rescue operations started, nine people were saved, and they are currently receiving medical care in various hospitals.

Following the tragedy, a number of reasons have surfaced, albeit none have been confirmed. According to preliminary reports, there was construction taking place in the building’s parking lot. The Aliyah Apartment complex, which had up to 12 flats and two penthouses on the top floor, was situated in Lucknow’s Hazratganj region.

Locals said that the builder had broken some of the building’s columns in order to instal the basement.

The construction was illegal, according to Lucknow Divisional Commissioner (Ms.) Roshan Jacob, and its “map was not passed.”

We are currently concentrating on rescue and relief operations. However, the builder would be the target of action, Jacob continued.

The Tuesday 5.8-magnitude earthquake that struck Nepal and caused tremors to be felt in Lucknow and other parts of north India has also been cited as a contributing factor in the collapse. The shaking persisted for a few seconds.

Tuesday, Chauhan stated that on the surface, “it appears a case of natural disaster.” He continued, “Perhaps the neighbouring Gomti river and the building’s location in a riverine belt—with its epicentre in Nepal—could have triggered the incident.”

The DGP stated that a team of structural specialists has been called to perform an examination, therefore the possibility of building work has not been fully ruled out.

Yogi Adityanath, the chief minister of Uttar Pradesh, has ordered officials to make sure the injured people receive sufficient care. Additionally, he has told hospitals to remain vigilant.

After the tragedy on Tuesday, Deputy CM Brajesh Pathak met with the injured people at the Civil Hospital (Shyama Prasad Mukherjee Hospital) in Hazratganj.

On Tuesday, the Uttar Pradesh government-supervised district administration, according to the defence minister Rajnath Singh, is offering all assistance available.