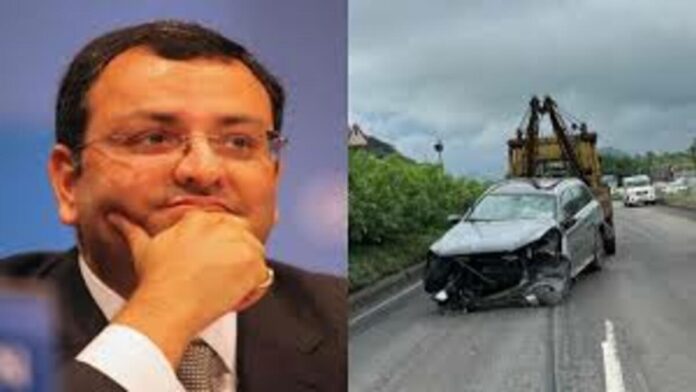 In the Palghar district of Maharashtra, industrialist Cyrus Mistry was murdered in an automobile accident after his Mercedes collided with a road divider. The country was devastated by the death of Cyrus Mistry, the former chairman of Tata Sons, and major political figures and businessmen expressed their condolences.

Around 3 p.m. on Sunday, Anahita Pandole was operating the vehicle when the collision occurred.

When the disaster occurred on the bridge over the Surya river in Charoti Naka, which is located 120 miles from Mumbai, Cyrus Mistry, a descendant of the enormous Shapoorji Pallonji Group, was travelling from Ahmedabad to Mumbai.

Balasaheb Patil, the district superintendent of police for Palghar, reported that “the accident occurred on the bridge over the Surya river, killing Mistry and another person on the scene while two others have been transferred to Gujarat for further treatment.”

A accident caused the airbags in the front seat of the car to activate earlier today, according to Maharashtra Police. Jahangir, a brother of Darius, and Cyrus Mistry were seated in the back seat. The Mercedes GLC 220D is equipped with a minimum of seven airbags, per the Mercedes handbook.

The airbags installed for back passengers, where Mistry and Jahangir were seated, did not deploy, according to the images from the accident scene.

According to a police officer, Anahita Pandole was driving a Mercedes at an excessive speed when she attempted to pass another vehicle from the wrong side.

When the tragedy occurred, Cyrus Mistry and Jahangir Pandole, who perished in the collision, were seated in the back seats. Anahita Pandole, the driver, and Darius Pandole, the passenger, both sustained injuries in the collision and have since been transported to a private hospital in Gujarat’s Vapi for additional care.

Devendra Fadnavis, the deputy chief minister and minister of the interior for Maharashtra, has requested that police conduct a thorough inquiry into the traffic tragedy.

Following the passing of the 54-year-old industrialist, the condolences began to stream in. Cyrus Mistry’s passing, according to Prime Minister Narendra Modi, is a significant loss to business and industry.

The premature death of Shri Cyrus Mistry is shocking, remarked PM Modi. He was a bright businessman who had faith in India’s ability to prosper economically. The business and industrial worlds have suffered greatly since his demise. We send our sympathies to his family and friends. May he rest in peace, his soul.

Vice President Jagdeep Dhankhar described it as a significant loss for the business community in India and stated, “Deeply grieved by the tragic demise of Shri Cyrus Mistry in a car accident today. My deepest sympathies go out to the grieving family members and friends. May he rest in peace, his soul.

Eknath Shinde, the chief minister of Maharashtra, expressed his condolences for Cyrus Mistry’s passing and noted that the industrialist was also a young man with an eye toward the future. A talented industrialist has left us. His passing affects not only the Mistry family but also India’s manufacturing economy.

Rahul Gandhi, the head of the Congress, praised Cyrus Mistry as one of India’s sharpest business minds and a contributor to its success story.

Piyush Goyal, Nitin Gadkari, and Nirmala Sitharaman, all union ministers, also expressed astonishment at Cyrus Mistry’s passing and lamented the loss of one of the country’s brightest stars in business.

Cyrus Mistry’s passing shook the business community, and leading industrialists paid respect to the late chairman of the Tata Group.

“So sad to hear about the awful news of Cyrus Mistry’s dying died in an accident,” Harsh Goenka tweeted. He was a good buddy, a gentleman, and a serious individual. He successfully headed the Tata group and played a key role in the establishment of the global building behemoth Shapoorji Pallonji.

“I am shocked and saddened by Mr. Cyrus Mistry’s unexpected death. It is terrible that he died at such a young age because he had a passion for life. In these trying times, please accept my sincere condolences and my prayers for his family, said N Chandrasekaran.

The Shapoorji Pallonji Group, which has been engaged in business for more than a century and is principally involved in the construction industry, included Cyrus Mistry, the late Pallonji Mistry’s son. Shapoorji Mistry, Mistry’s grandfather, initially bought a share in Tata Sons in the 1930s.

When Cyrus Mistry was chosen to succeed Ratan Tata as the president of the Tata Group in 2012, he was already in charge of Shapoorji Pallonji Group enterprises.

Cyrus Mistry was ousted in a high-profile boardroom coup in October 2016 after serving as CEO for four years.

Through his business Cyrus Investments Pvt. Limited, Cyrus Mistry owned 18.4% of Tata Sons. His net worth was about $10 billion in 2018.