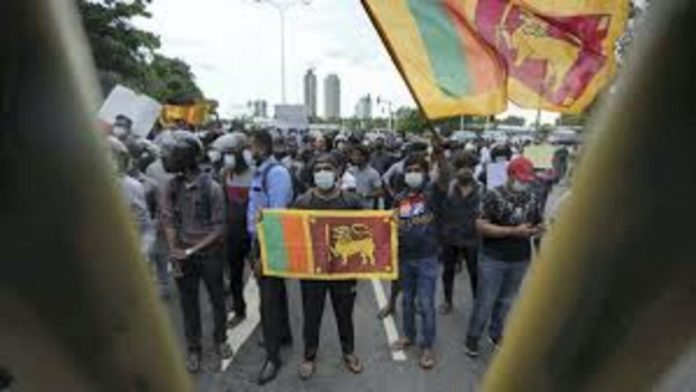 Sri Lankan food traders accuse the Rajapaksa government of selling everything to China, claiming that the country has nothing and has purchased everything on credit from foreign countries.

In Sri Lanka, prices for fruits and vegetables are soaring due to the country’s economic and political problems. Farukh describes himself as a fruit merchant “Apples were selling for Rs 500 per kg three to four months ago, but now they are selling for Rs 1000 per kg. Previously, the pear was sold for Rs 700 per kg; currently, it is offered for Rs 1500 per kg. People are cash-strapped.”

They showed their unhappiness and rage by stating that costs are rising every day and that they do not have any cash on hand. Raja mentioned another food vendor “There isn’t any money. Gotabaya is useless, and he must depart.”

In the midst of Sri Lanka’s unparalleled economic crisis, Opposition Leader Sajith Premadasa has asked for the Executive Presidential system to be abolished.

“For nearly two decades, every leader has vowed to eliminate the Executive Presidency, but all they have done is strengthen it,” Premadasa said in a fiery speech in parliament on Tuesday, reminding lawmakers of the need to implement a new election system. Meanwhile, Ali Sabry, the newly appointed Finance Minister, resigned on Tuesday.

Sri Lanka is in the midst of a severe economic crisis, with food and fuel shortages affecting a substantial portion of the population. Since the outbreak of the COVID-19 pandemic, the economy has been in free fall.

Sri Lanka is also experiencing a foreign exchange crisis, which has hampered the country’s ability to purchase food and gasoline, resulting in power outages. Sri Lanka was forced to seek aid from friendly countries due to a shortage of basic products.

Twenty-six members of Sri Lanka’s Cabinet resigned on Sunday, amid mounting public outrage over the government’s handling of the country’s economic crisis.

Meanwhile, the 36-hour curfew imposed on Sri Lanka on Saturday evening at 6 p.m. was lifted at 6 a.m. on Monday, but the country remains in a state of emergency.

On Saturday, India supplied 40,000 MT of diesel to Sri Lanka to help alleviate the island’s power crisis. This was the fourth consignment of fuel provided to Colombo as part of India’s US $500 million oil line of credit (LoC) with Sri Lanka.

In addition, over the last 50 days, India has delivered around 200,000 MT of gasoline to the island nation.