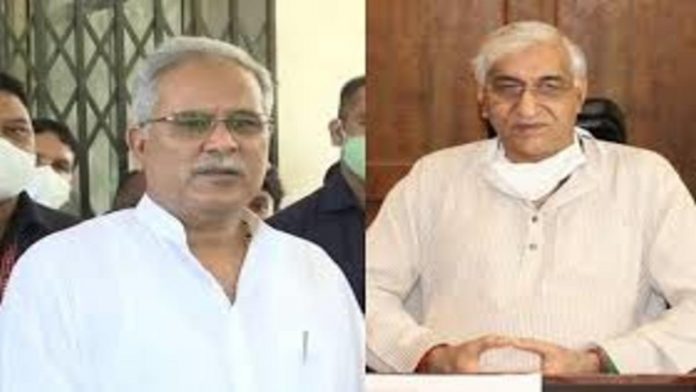 For allegedly manhandling and harassing a medical worker in a hospital in Bilaspur, the Chhattisgarh Police have filed a criminal complaint against state Congress secretary Pankaj Singh, who is also one of health minister TS Singh Deo’s closest aides. However, after Bilaspur MLA Shailesh Pandey inquired if Pankaj Singh was targeted for being close to the health minister, the First Information Report (FIR) refocused attention on Chhattisgarh’s leadership fight.

“Police are not able to explain why they have booked Singh. Police are saying that the instructions for FIR were given by senior officials hence… I asked the police, are they registering cases against us because we are close to Singh Deo?… Last year I was also booked by police for just helping the poor and now Singh was targeted…These questions should be answered,” said Shailesh Pandey, who is also known to be close to Singh Deo, said.

The Congress MLA went to the police station on Tuesday with his supporters to condemn the police action.

Even after several attempts, health minister Singh Deo could not be reached.

Bhupesh Baghel and Singh Deo are involved in a battle for Chhattisgarh’s chief ministerial seat, which took them to Delhi last month for meetings with key Congress officials.

Bhupesh Baghel appeared to have purchased some time on August 28 after a long discussion with the Congress high command over recommendations that he should step down due to a rumoured two-and-a-half-year power-sharing deal with colleague Singh Deo. He added Congress leader Rahul Gandhi would visit the state next week, particularly Bastar, to see firsthand the progress made.

When Singh Deo returned the next day, he said he had met with the leadership as well and that they had kept a “decision safe.”

In December 2018, following a dominant Congress performance in which the party won 68 of 90 seats, friction between Bhupesh Baghel and TS Singh Deo led to Tamradhwaj Sahu, now the home minister, emerging as the frontrunner for chief minister. However, pushed by the idea that a third leader would take the helm, Baghel and Singh Deo, along with Punia and Gandhi, reportedly arrived in Delhi.

The event at Bilaspur hospital on September 18, when Pankaj Singh visited the government-run Chhattisgarh Institute of Medical Sciences (CIMS), Bilaspur, after receiving a call from a patient, sparked the Congress MLA’s rebuke of Bhupesh Baghel.

Deepak Jha, the Superintendent of Police in Bilaspur, said they got a complaint on September 19 about the incident the day before. “A patient had come for a radiology examination at CIMS and for some reason the machine was dysfunctional. Since, there was a delay due to the technical glitch, the patient called Pankaj Singh, who reached the hospital. Singh got irritated with the delay and manhandled and abused the radiographer, Tula Tande. The next day, Tande reached police and lodged a complaint,” according to the Bilaspur SP.

According to police, they investigated the situation and collected CCTV evidence from the hospital before filing a report on Monday.

“We have booked Singh under the section 186 IPC (obstruction in government work), section 353 (criminal assault on a govt employee on duty) and section 3 of Chhattisgarh Medical Service Persons and Medical Service Institutions Prevention of Violence and Damage or Loss to Property Act 2010,” the Bilaspur district police chief said, adding that the preliminary stage of investigation is complete and police will proceed for Singh’s arrest based on the final findings of the investigation.

Shailesh Nitin Trivedi, the state communications director for the Congress, said the situation should not be politicised because it involves allegedly breaking the law, a warning addressed at his own party.

“We are living in a state where even CM’s father was booked by the police because he had given a statement which is against a particular community. The arrest of Singh should not be politicised and let the law take its own course,” said Trivedi.