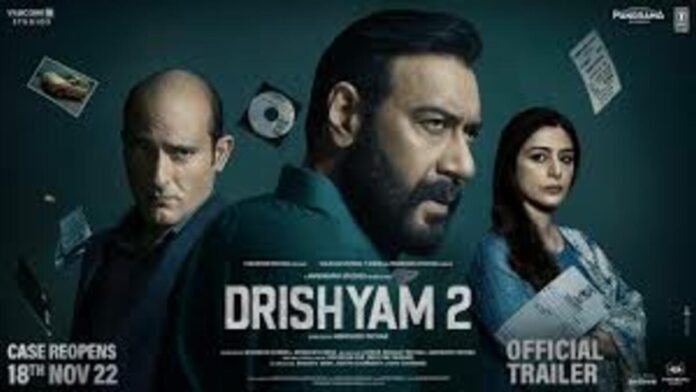 The tale concept, the all-star ensemble, and the actors’ acting prowess have all been highly praised in the movie Drishyam 2, which stars Ajay Devgn, Tabu, and Akshaye Khanna. Nevertheless, according to media sources, four days after its premiere, the movie has already made Rs 75 crore and is on track to join the 100 crore club shortly. Manoj Desai, a film exhibitor and former producer, spoke out amid all of this about how Drishyam 2 is playing to packed houses in Mumbai’s famous halls.

For those who are unaware, Drishyam and Drishyam 2 are based on South Indian films with the same story about a man who will sacrifice anything for his family and feature Mohanlal.

For the first time in years, Mumbai’s famed theaters, Maratha Mandir, which can hold 1000 people, and Gaiety Galaxy, which can hold 1200 people, appear to have sold-out performances of Ajay Devgn’s Drishyam 2. In an interview with the FilmiFever Youtube channel, film exhibitor Manoj Desai discussed it and said, “We were in tears because Bollywood films were performing so poorly. But a movie has produced houseful shows after so many years.

As the conversation continued, Manoj Desai disclosed that Bollywood could surpass the success of Drishyam 2 if it produced fresh content. But Bollywood doesn’t want to bother, he continued. Distributors will put the responsibility on exhibitors, and producers will place it on them. They will be secure, but we will be left with the leftovers. We are bathing in the Ganga River with them for the first time in a very long time.

There were only four films in Bollywood’s 2022 that had significant box office success, hence the year wasn’t extremely productive. Brahmastra, Gangubai Kathiawadi, The Kashmir Files, and Bhool Bhulaiyaa 2. Now, it appears that Drishyam 2 is moving in the same direction.